'Even a Modest Increase' in Fruit and Veg Can Reduce Likelihood of Type 2 Diabetes, Expert Explains 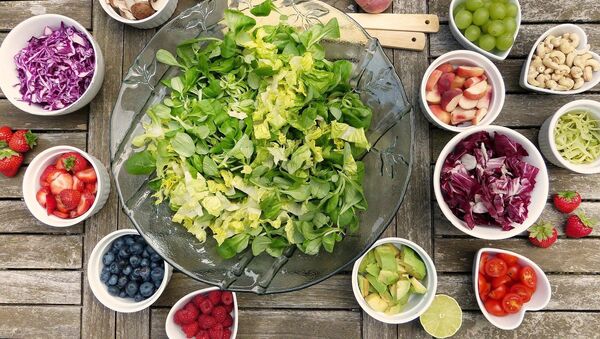 Mohamed Elmaazi
All materialsWrite to the author
An estimated 463 million people worldwide have diabetes, the majority of whom have type 2 which is linked to excess body weight and physical inactivity. 4.2 million people died from the condition in 2019 alone, according to the International Diabetes Federation.

Even small increases in fruit and vegetable intake can reduce the chances of someone getting type 2 diabetes, according to a new peer reviewed study published in the British Medical Journal. The study observed thousands of individuals and their diets, both with and without diabetes, across eight countries.

Professor Nita Forouhi, who co-authored the study with 44 other specialists, researches on the links between diet and type 2 diabetes at the University of Cambridge. She is Programme Leader of the University's Nutritional Epidemiology programme of at the MRC Epidemiology Unit, and she explained to Sputnik the significance of their findings, which used "blood markers" to estimate fruit and veg consumption.

Sputnik: Has your study told us anything we don't already know, or merely confirmed widely known facts about diet and diabetes?

Professor Nita Forouhi: Though the benefits of fruit/veg consumption have been promoted for decades in the “five-a-day” message for lowering risk of conditions like heart disease, stroke and come types of cancer, in the past there has been uncertainty about their role for the prevention of type 2 diabetes specifically. Now, our study, using objective blood markers of fruit/veg intake shows that even a small increase in the amount of fruit/veg in the diet can help to reduce the risk of future development of type 2 diabetes.

Sputnik: How do "observational studies" like this one compare to other ways of examining potential health benefits of food?

Professor Nita Forouhi: Often in nutritional research the so-called “gold standard” method of a double blind randomised controlled trial (RCT) is simply not possible for practical reasons. Think about it. Would you or I be prepared to stick to one type of diet regime, day in and day, out for several years between not having a chronic disease like type 2 diabetes or heart disease until it develops? [A diet] regime we were randomly allocated to and did not have a choice about it, [in order] to be true to the spirit of the randomised controlled intervention study. For these reasons often people find it really hard to stick to the prescribed diet and this can lead to dilution of the findings. RCTs of foods are materially different to RCTs of pharmaceutical products like taking a pill or a placebo, and they are notoriously expensive too, and blinding or masking is not really possible for foods. So all these factors can break the fundamental requirements of a well conducted RCT, so they really don’t remain as a gold standard for food based research.

An observational study has some important limitations such as it cannot of itself prove a causal link because it does not intervene with a specific diet, but rather it observes what happens over time. But when an observational study is carefully conducted and accounts for alternative factors that could potentially explain an observed link, and the study can be replicated in different locations with similar findings, we can then draw conclusions from such studies with confidence.

In our study we were able to achieve this very well, by accounting for a host of such factors including age, sex, body mass index, education level, occupation, smoking, alcohol intake, physical activity and use of vitamin supplements, and the link for biomarkers of fruit/veg was still present, independent of those factors. Also, our study was in eight different European countries with widely varying diets and a particular strength was that we used blood biomarkers of fruit/veg intake which helps to overcome the limitations of measurement error when relying on people trying to remember how much fruit/veg and other foods they ate.

Each study design type has its pros and cons, but much of the dietary guidance is based on findings from well conducted observational studies that follow people up over time to test the link between habitually consumed diets and future disease risk.

And in a wider context, most of the existing public health guidelines do not have the luxury of RCT based evidence but rely on a mixture of types of evidence – be it guidance on tobacco smoking, physical activity, use of seat belts, occupational safety, air pollution, climate change, etc.

Sputnik: What is the amount of fruit and vegetables one would have to consume, according to the current research, in order to reduce one's likelihood of developing diabetes?

Professor Nita Forouhi: Wider public health guidelines promote the benefits of consuming at least five portions of fruit/veg a day, equivalent to 400 grams per day of fruit and vegetables. Our research shows that even a modest increase in fruit/veg consumption would be helpful for reducing the likelihood of type 2 diabetes.

In our study eating the equivalent of around 66 grams or about 1 portion of fruit/veg per day regularly could be helpful for preventing type 2 diabetes. This is an important message because despite guidelines of “5-a-day” the reality is that for most people this is a distant goal. For example, data from the European Union show that only 1 in 7 of the population aged over 15 yeas eats at least 5 portions daily. Therefore, it is good to know that there may be meaningful benefits from making small changes if made by many people.

Sputnik: To what degree of certainty would you be willing to conclude that eating fruit and vegetables substantially reduce the likelihood of someone contracting diabetes?

Professor Nita Forouhi: Certainty is hard because nutritional research is often challenged by having to rely on asking people what they have eaten, and this leads to inaccurate and error-prone estimates.

In our research we used a novel way, by measuring blood markers to estimate fruit and vegetable consumption. Because markers in the blood do not rely on memory and are objective, we can be more confident that there is an association between higher consumption of fruit and veg and lower risk of future type 2 diabetes. Also, our study was large and in 8 different countries with widely varying diets, and based on nearly 10,000 new cases of type 2 diabetes developing over 10 years, and this gives greater certainty. Our research does not directly answer the question of cause and effect, but it does give credible findings from a very large study that used an objective way to estimate fruit and veg intake and accounted for many other factors that could interfere with interpretation.

Sputnik: Is it possible that there are other factors which can explain the results? For example, people who eat fruit and vegetables regularly may also be more likely to eat healthily more generally or even exercise more often and therefore may be less likely to develop diabetes for these reasons?

Professor Nita Forouhi: Yes, in observational research such as our current study, there is always the possibility of influence from unknown factors. But mindful of this possibility we paid particular attention to minimising it. In our analysis we took consideration of the potential influence of many factors, including the participants’ age, whether they were men or women, social factors such as education level, physical activity level, smoking or alcohol consumption, vitamin supplement use and also overall dietary quality.

Despite accounting for this extensive range of factors, we still found there was a link between objective markers of fruit-veg intake and risk of future type 2 diabetes.

Sputnik: What kind of further research is needed to more accurately determine any causal relationship between eating fruit and vegetables and reducing one's chances of developing diabetes?

Professor Nita Forouhi: There are different ways to determine a causal relationship.

A well known way is to conduct a randomised controlled trial, but that is challenging for type 2 diabetes among people without diabetes at the start, because the condition can take several years to develop. That is why there is no such RCT in existence.

Another way is to conduct carefully designed observational studies, that are large and hence reduce findings due to chance, control for factors that can add noise and influence interpretation, and seek to replicate the findings in different populations and settings. These and other criteria were described in the 1960s and are known as the “Bradford Hill criteria” for assessing causal relationships from observational research. It would be important for other researchers to repeat our work in different populations including people of different ethnic groups. If the findings point all in the same direction and are of a similar magnitude, that would increase confidence.

Finally, the scientific community needs to acknowledge that there are pros and cons of each type of study design and no research design is perfect. So RCTs have several limitations too, as do observational studies, but they can be complementary to each other. RCTs of intermediate pathways to disease development can also offer an avenue – including the study of endpoints such as weight change, blood pressure, glucose and insulin levels, lipid levels and so on. Thus multiple types of studies, considered together, can best support a causal relationship.

Sputnik: What recommendations would you now suggest either at the policy level or the individual level, in terms of people's dietary habits?

Professor Nita Forouhi: Our findings suggest that small and achievable increases in diets rich in fruit and vegetable intake can help prevent type 2 diabetes. At the policy level, increasing the access to and affordability of fruit and vegetables is important.

It is really important to understand that our research is not telling us to consume vitamins or pills of carotenoids; quite the opposite, there are multiple benefits from consuming fruit and veg that are rich in a multitude of vitamins, minerals, polyphenols and fibre and that fruit and veg are more than the sum of their vitamin or nutrient parts.

Our findings should be taken in the wider context to consume fruit and veg as part of an overall healthy diet and healthy behaviours, including being physically active, not smoking and having limited alcohol consumption.