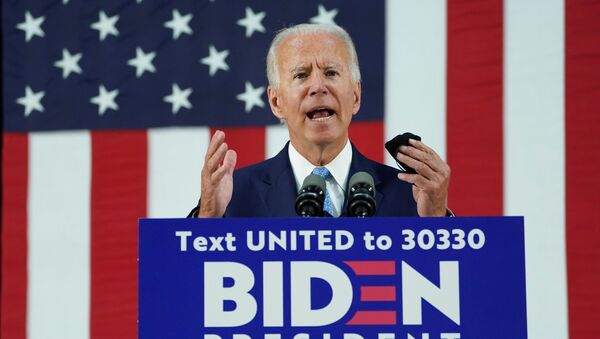 There was a well-publicised Bernie Sanders trip to the USSR in 1988, but Joe Biden, the would-be Democratic presidential candidate, visited America's Cold War foe years before, when the geopolitical situation was much more complex.

Joe Biden visited the Soviet Union in August 1979 as part of a five-day Senate mission to discuss disarmament.

A brief piece in the Pravda newspaper, published on 27 August that year, recapped Biden’s visit to Leningrad at the helm of a group of US senators.

They reportedly paid tribute to victims of the Second World War at a local cemetery, with the 36-year-old Biden saying: “Humanity is thankful to Leningraders for their great feat. The peace they achieved must become the goal of our life.”

The Americans also went to the Hermitage Museum and the Peterhof Palace, before attending a dinner with members of the city executive committee, according to the article.

Biden, then the Democratic senator from Delaware and head of the European Affairs sub-committee of the Foreign Relations Committee, was leading a group of lawmakers who were uncertain about the Strategic Arms Limitation Talks (SALT) with the Soviet Union.

A month prior to the visit, the two nuclear-armed superpowers signed the SALT II treaty, which would put broad limitations on strategic offensive weapons. US Congress refused to ratify the agreement, and Biden, a vocal supporter of the deal, took some of the senators to the USSR to bring them on board and educate Soviet leaders about their concerns.

The trip left him with the impression that the Soviet leadership was genuinely prepared to consider deep cuts to its nuclear and conventional arsenal, but the war in Afghanistan that started in December 1979 upended the decade-long detente, and the SALT II treaty was never ratified.

The Biden-led group of senators also visited Moscow, where they met with then-Soviet Prime Minister Aleksei Kosygin, Defence Minister Dmitry Ustinov, and several other high-profile members of the government and parliament (some details of the trip have been declassified).

Recalling those talks during a 2011 visit to Russia, Biden said that Soviet leader Leonid Brezhnev was “sicker than we thought then”.

Biden recounted: “He excused himself and left the meeting early and turned it over to Kosygin, Premier Kosygin, who in his opening statement said the following – I will never forget it – he said: ‘Before we begin our discussion, Senator, let’s agree that we do not trust you, and you do not trust us. And we both have good reason.’”