All That Glitters is Gold: Amid Raging Pandemic, Gold to Remain Lucrative Asset Class, Say Analysts 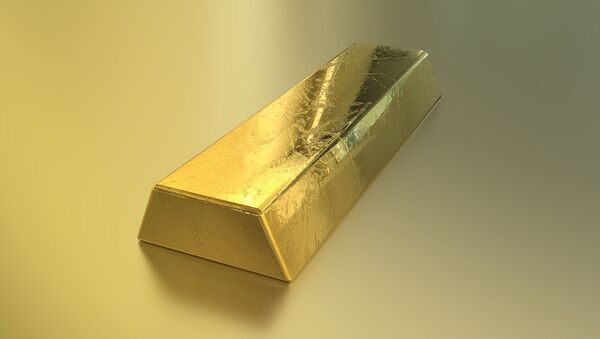 New Delhi (Sputnik): Indian stock markets are up by around 40 percent since crashing in March ahead of the lockdown announced that month, But while trading at 36,643, the main Sensex index is yet to reach its pre-pandemic levels of over 41,000 points. Low interest rates and falling real estate incomes are forcing investors to look for safer havens.

Shree Janki Jewellers – a gold outlet in Delhi’s Laxmi Nagar neighbourhood has been busy sending texts to its customers after reopening the shop when the lockdown caused by the Covid-19 pandemic was relaxed at the start of June.

The shop had remained shuttered for the whole of April and May as part of government's measures to prevent the spread of the pandemic.

Owner Rajesh Garg told Sputnik that the shop now opens every other day, and that customers are making enquiries about buying gold despite the price of the yellow metal shooting up, as people consider it as a safe hedge against uncertainties in the stock market, low interest rates and construction risk in the real estate sector.

Covid-19: Curious Case of Rebound in Indian Equities from March Lows Despite Recession Fear
On Wednesday, gold continued its sharp rally and touched a new peak of INR 48,925 ($652.33) per 10 grams on the major domestic bullion market, Zaveri Bazar, in Mumbai. This represents an almost 30 percent rise in the price of gold since December 2019 when it was trading at INR 39,083 per 10 grams, according to the Indian Bullion and Jewelers Association.

Gold prices are skyrocketing in the international market as well. On expectations of greater stimulus from the Federal Reserve, the spot prices of the yellow metal topped $1,800 per ounce and is currently trading at $1,813.30 per ounce.

Experts and analysts feel that the gold price in the domestic market is likely to stay firm. “Customers are comfortably buying at the current rates as they are aware that the rates are going up. They are also aware of the fact that the pandemic situation will also continue. However, ever since the gradual opening up of the economy after the lockdown, buying interest is visible. Request to repurchase gold is not even 25 percent of what it used to be in the past. Buying interest is more,” Nitin Khandelwal, the former president of the All India Gem and Jewelry Domestic Council told Sputnik.

India Must Return Rural Economy to the Forefront of a National Growth Trajectory - Experts
Asked whether the gold prices in India will remain firm going forward, given the festive season approaching in October, Khandelwal said: “Gold prices are going up on every platform, be it physical gold, sovereign gold bond, and gold equity traded fund. And there are multiple factors behind the rally. Amid falling crude oil prices, tension between Indian and China and China and US, people consider gold as a safe haven.'

Kotak Bank analysts feel that gold may rise at least 10 percent from current levels, with the global economic situation helping the commodity.

“Gold could rally another 10 percent in the next six to nine months. Rising US-China trade tensions, negative real rates by the central banks and fallout from the Covid will drive gold prices, which are already up 41 percent year on year,” said Shekhar Bhandari, Senior Executive Vice President (global transactions) at Kotak Bank.

According to Kotak Bank, demand for jewellery has improved in the Indian states of Karnataka, Tamil Nadu, Kerala and West Bengal.

Other investment options are not as lucrative, at least for now. Interest rates on small savings like public provident funds and fixed deposits have come down since April this year. Against interest rate of 6.4 percent on fixed deposits during pre-pandemic times, India’s largest public sector lender, State Bank of India is now offering interest rates of just 5.1 percent.

Similarly, the rate of interest in the much sought after Public Provident Fund was cut in April to 7.1 percent compared with 7.9 percent previously. Equity mutual funds saw their worst inflows in four years in June at just INR 2600 milion ($34 million).

India is the world’s largest buyer of gold, with annual imports of between 800 and 900 tonnes.