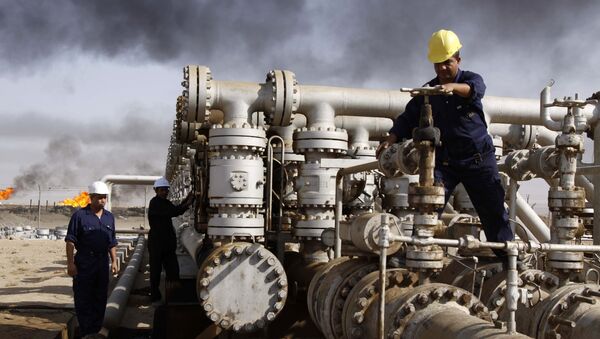 © AP Photo / Nabil al-Jourani
Subscribe
International
India
Africa
WASHINGTON (Sputnik) - Democrats in the US House of Representatives have proposed a ban on spending the 2021 defence budget on the establishment by the US military of control over oil facilities in Syria and Iraq, according to the Fiscal Year 2021 Defence Funding Bill.

"None of the funds appropriated or otherwise made available by this or any other Act shall be obligated or expended by the United States Government for a purpose as follows ... to exercise United States control over any oil resource of Iraq or Syria," the document released on Tuesday read.

In addition, the federal funds are prohibited from being used for the construction of facilities for the permanent deployment of US troops in Iraq or Afghanistan.

Democrats in the House of Representatives and Republicans in the Senate are expected to propose two versions of the budget for the fiscal year 2021, which will then be brought together by a coordinating commission. The agreed document will subsequently be signed by the president.

In early October 2019, the United States announced the withdrawal of its forces from northeastern Syria, immediately after which Turkey launched Operation Peace Spring against the Kurdish militia and Daesh in the area.

Two Rockets Land in Vicinity of Chinese Oil Company Site in Iraq – Military Centre
However, the United States later announced its intent to stay in the area and ensure that its allies, the Kurdish-led Syrian Democratic Forces, retained control over oil-rich land.

US President Donald Trump then said that he was planning to invite large US oil companies to the area to explore its oil fields and, which could "do it properly."

Russian Defence Minister Sergei Shoigu previously said that the United States was openly and unceremoniously robbing oil fields in Syria and, at the same time, banning the supply of oil to this country with sanctions.