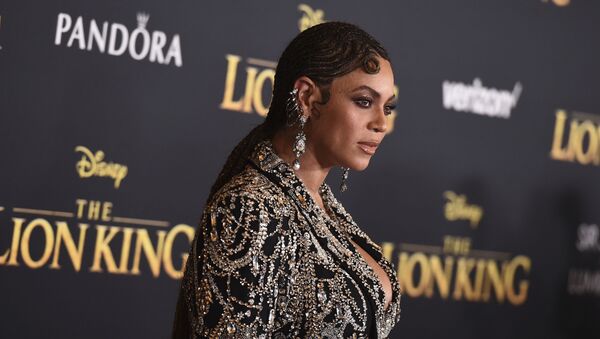 © AP Photo / Jordan Strauss
Subscribe
International
India
Africa
Texas-born “Halo” superstar Beyoncé Giselle Knowles-Carter, simply known to many as Beyoncé, may have woken up to surprising news during the weekend to find out that an aspiring congressional candidate from Florida had tweeted that she is a part of some global conspiracy agenda and also an occasional admirer of Satan.

“Beyoncé you are on notice!” K.W. Miller, who is running as an independent candidate for US Congress in Florida’s 18th Congressional District, announced on social media after “revealing” that the acclaimed Hollywood celebrity was actually not African American but an Italian woman named Ann Marie Lastrassi. The politician also claimed that the singer was a part of the “Soros Deep State agenda for the Black Lives Matter movement” whose “coded globalist messages” were encrypted in her songs, including the single “Formation”.

“The song clearly admitted that she was demonic and that she worshipped in the Satanist churches located in Alabama & Louisiana”, he assured on Twitter.

K. W. Miller also noted that Beyonce was the one who kept “Satanist symbols in her bag”.

You all do know that Beyoncé’s song “Formation” was a secret coded message to the globalists I certainly hope?

The song clearly admitted that she was demonic and that she worshipped in the Satanist churches located in Alabama & Louisiana.

She keeps Satanist symbols in her bag.

His messages were accompanied by #GreatAwakening and #QAnon hashtags, in reference to conspiracy theories related to beliefs about a “deep state” plot against President Trump and his supporters. Miller, however, later insisted that he did not follow QAnon.

“QAnon follows me”, he argued instead.

The politician, whose Twitter profile says that he “believes in American exceptionalism” also called out another American singer, Patti LaBelle, in his thread of accusations, referring to her as “another Illuminati globalist puppet”.

His claims seemed to have opened Pandora's box on Twitter.

“In other countries this person would be getting treatment for serious mental problems, but in America he's running for Congress,” one social media user commented on the politician’s Twitter thread.

Sir, you dropped your hat: pic.twitter.com/yU0i7v7mo1

NO LIES DETECTED, WE HAVE PROOF pic.twitter.com/mXXAKSZuqq

At first I had many questions but then after seeing what state you’re representing it all makes perfect sense pic.twitter.com/cbK2pDkYdh

A family of Italians. Who knew? pic.twitter.com/ga3E2ec9WZ

The guy with 17 facial reconstructive surgeries says Beyonce is pretending to be someone she isn't pic.twitter.com/fYU2GS2b6D

And these are the people in power pic.twitter.com/6Oi35PVOcZ

Miller, who runs under no party affiliation but defines himself as a “Constitutional Conservative”, later told TCPalm that his messages were “bait” and a “teaching moment”.

“We threw out, I guess the words we’ll use are some contentious points for the lefts and globalists to chew on,” the congressional candidate said, claiming that sometimes he has to “throw some meat into the lion's den to get everybody’s attention”.

The mentioned singers have not addressed the politician’s claims so far.