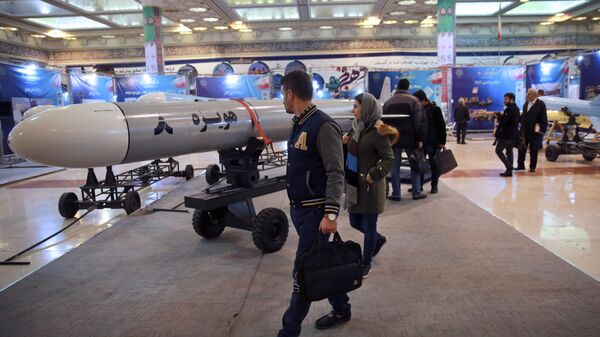 Ilya Tsukanov
All materialsWrite to the author
Washington's bid to extend the international arms embargo against Iran past its October 2020 deadline was rejected last week, with US special envoy for Iran Brian Hook warning that the US would leave the military option "on the table" to prevent Tehran from acquiring nuclear weapons. Iranian leaders have denied having any such ambitions.

The Middle East will be engulfed in further conflict if the UN arms embargo against Iran is not extended, Secretary of State Mike Pompeo has announced.

"The Security Council must extend the arms embargo on Iran to prevent further conflict in the region," Pompeo said, speaking to reporters in Washington on Wednesday. "No serious person can possibly believe Iran will use any weapon it receives for peaceful ends," he added.

"Last week, a United Nations report confirmed that the weapons shipments the United States interdicted back in November of 2019 and then again in February of this year were of Iranian origin," Pompeo continued. "You'll recall that when we said that, the Iranians denied it. The UN has now confirmed this. Iran is not abiding by the UN arms embargo restrictions that are due to expire in less than four months now."

"Now we've interdicted another shipment of weapons heading to the Houthis. On June 28, US and partner forces interdicted a vessel off the coast of Yemen with a list of cargo including 200 RPGs, more than 1,700 AK rifles, 21 surface to air and land attack missiles, several anti-tank missiles, and other advanced weapons and missiles," he added.

Watch Houthis Show Off New Line of Home-Grown Surface-to-Air Missiles
Iran has repeatedly expressed sympathy for the Shia Houthi militants fighting against the Saudi-led coalition in Yemen, but has denied sending the fighters any military support, pointing to Riyadh's naval blockade of the war-torn nation. At the same time, Saudi Arabia, its regional allies and the United States have repeatedly accused Tehran of aiding the Houthis and providing them with the advanced drone and missile technology used to strike Saudi oil facilities, airports, military bases and cities. Iran has criticized Saudi authorities over the five year-long war, and offered to mediate between Riyadh and the Houthis to end the conflict.

During Wednesday's press conference, Pompeo also warned crisis-hit Lebanon against importing Iranian oil, promising sanctions if Beirut pens an agreement with Tehran on the issue. "That will be unacceptable. It would be a sanctioned product, for sure. We will do everything we can to make sure that Iran can't continue to sell crude oil anywhere, including to Hezbollah," he said.

Pompeo's comments follow remarks by Hezbollah leader Hassan Nasrallah on Tuesday urging the Lebanese government to buy fuel from Iran and to emulate its economic model of self-sufficiency.

The secretary also commented on the travel restrictions remaining in place between Washington and Brussels, saying "real technical progress" has been made in talks but that more needs to be done. Last week, the European Union published a list of 14 'safe' approved nations for resumed two-way leisure air travel including Algeria, Australia, Canada, Georgia, Japan, Montenegro, Morocco, New Zealand, Rwanda, Serbia, South Korea, Thailand, Tunisia and Uruguay, but left the US off the safe list amid ongoing concerns over America's high coronavirus infection rates. Brussels promised air travel with China could also be resumed if Beijing reciprocated.

The US stepped up its efforts to save the UN arms embargo against Iran past its October expiry date earlier this year, accusing Tehran of being "the world's most heinous terrorist regime" and threatening military action if the Islamic Republic tried to build a nuclear bomb. Washington's embargo campaign stalled last week after Secretary Pompeo's attempt to convince the Security Council to approve an indefinite extension of the embargo failed to receive support not only from veto-wielding members Russia and China, but from the US's own European allies as well.

Iran maintains that it has no intention of pursuing a nuclear weapon, or weapons of mass destruction of any kind, and has slammed the US over its unilateral withdrawal from the nuclear deal in 2018, and the deal's European signatories over their failure to provide Tehran with the sanctions relief promised by the treaty.