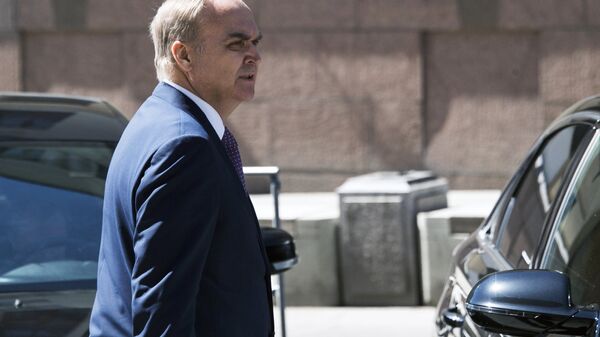 © Sputnik / Maksim Blinov
/
Go to the mediabank
Subscribe
International
India
Africa
The New York Times newspaper published an article in late June citing unnamed intelligence officials as saying the US President had been presented with an intelligence report claiming Russia could have paid bounties to Taliban*-linked militants to assassinate US troops in Afghanistan.

Russian and US officials have discussed allegations that Russia offered bounties to kill US soldiers in Afghanistan, Russian Ambassador to the United States Anatoly Antonov said.

"We are in close contact with our American official colleagues and we are of course discussing all issues regarding this provocation published by some mass media in the United States", Antonov said in a National Interest forum on Wednesday. "I would like to totally reject all accusations against the Russians. We are not interested in victory of terrorism in Afghanistan".

He added that Russia has always been ready to assist the US in its fight against terrorism in Afghanistan.

US President Donald Trump said earlier that many intelligence officials think that the alleged Russian bounties for US troops in Afghanistan never took place, adding that the information was not presented to him because the intelligence did not rise to the necessary level.

Russian officials previously said the allegations were part of the internal political infighting in the United States.