#RipJeffBezos: The Internet Mourns Billionaire Over False Claims He Drowned in Amazon (the River) 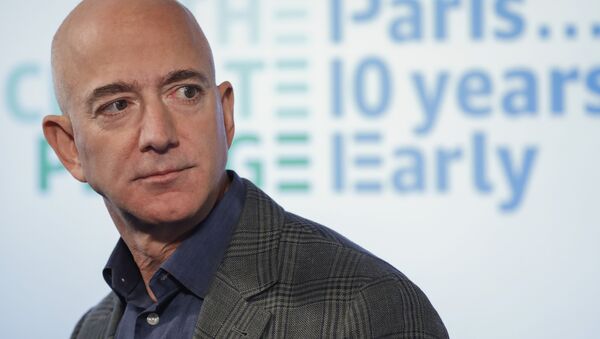 The founder of e-commerce giant Amazon, who is actually alive and well, has been trending on Twitter because of one big post-ironic joke. Social media users are now paying their tributes to the “late” billionaire (some of them are genuinely hilarious).

Jeff Bezos has become the victim of a giant practical joke claiming that he has died.

The hashtag #RipJeffBezos has been doing the rounds on Twitter on Wednesday, apparently launched in an attempt to repeat Tuesday’s Ellen Degeneres death hoax.

“i’m literally sobbing. first ellen now jeff. i can’t believe he drowned in the amazon river.” read one of the early tweets, featuring a poorly-doctored photo of Bezos in the river with two big red Xs over his eyes. “he didn’t deserve this. ok maybe he did. yeah he definitely deserved this.”

i’m literally sobbing. first ellen now jeff. i can’t believe he drowned in the amazon river. he didn’t deserve this. ok maybe he did. yeah he definitely deserved this #ripjeffbezos pic.twitter.com/CxyJHtMpXN

And it seems to me
you lived your life
like a vandal breaking wind pic.twitter.com/ySAy23WjLf

​The hashtag #RIPEllen went viral on Tuesday in a similar fashion, reportedly in reference to recent rumours that her eponymous chat show might soon get cancelled.