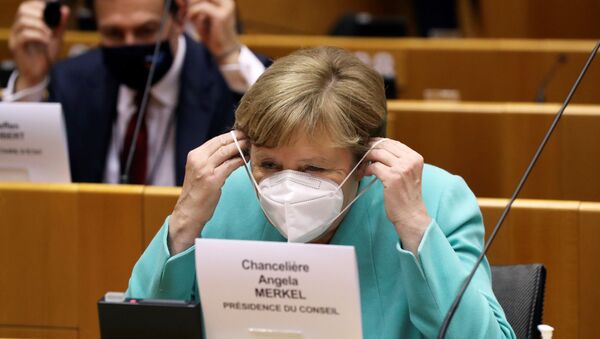 MOSCOW (Sputnik) - The coronavirus outbreak is a historic challenge that will determine Germany's presidency of the European Union in the next six months, Chancellor Angela Merkel said Wednesday.

"Overcoming the pandemic and its consequences will shape our presidency of the Council [of the EU]," she in a speech to the European Parliament.

The leader of EU's economic powerhouse spoke about her vision of Europe during a presentation of "Together for Europe’s Recovery" program in Brussels.

She said European economies had been ravaged by the pandemic and it was in everyone's best interest to help the weakest members cope with its aftermath.

"Our economies across Europe were and still are being hit hard. Millions have lost their jobs... They need our collective support," Merkel stressed.

She called on EU nations to rally behind the German-French initiative to create a recovery fund of at least 500 billion euros ($565 billion) to rescue worst-affected member states.

"It's our common goal to reach consensus as fast as possible. We are being spurred on by the depth of the economic collapse. We must not lose time," she said.

The rescue fund has been criticized by Europe's frugal northern members for prioritizing grants financed through jointly borrowed debt, instead of loans.

Merkel said she hoped that an agreement on the fund would be reached in summer before August's summer recess.

She added that European solidarity was "a lasting investment" and warned that Europeans needed to find consensus on what divided them if they wanted to get through the crisis.

"Europe will emerge from the crisis stronger than before if we work together to make it stronger. No one will get through this crisis alone. We are all vulnerable," she said.

Moving on to EU's foreign policy in the coming months, Merkel said it would focus on Brexit, entry talks with North Macedonia and Albania, and continued dialogue with China.

She complained about what she called negligible progress in exit talks with the United Kingdom that increased the likelihood of a no-deal breakup.

"Progress made so far has been negligible, to put it mildly ... I will continue to advocate for a good solution, but we must prepare for a possibility of a no-deal," Merkel admitted.

The EU and the UK had agreed to speed up talks on a deal that will shape their post-Brexit ties by fall and ratify it before the end of 2020, but the pandemic has thrown their plans into disarray.