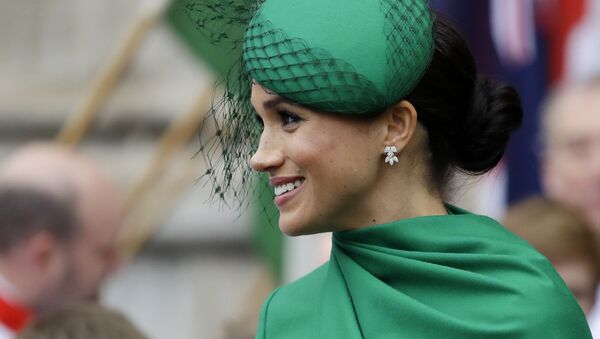 © AP Photo / Kirsty Wigglesworth
Subscribe
Some of the world’s most famous women will give advice to young female leaders. The UN-led campaign, run under the motto “uniting girls to change the world” has enlisted Meghan Markle as keynote speaker.

Meghan Markle, the Duchess of Sussex, will appear together with former US First Lady Michelle Obama and Bollywood superstar Priyanka Chopra at the annual Girl Up Leadership Summit.

The global initiative, launched in 2010 by the UN Foundation, will hold its annual summit online this year from Monday, 13 July to Wednesday, 15 July.

Markle is expected to be a keynote speaker, while Obama will give a special message and Chopra will host a Q&A session.

The present is female! 💫 But don’t take our word for it. Hear Meghan Markle, The Duchess of Sussex’s advice for global girls leaders when she takes the stage at our @GirlUp Leadership Summit, happening virtually July 13-15! Register here 🎟: https://t.co/YZT6jBf6Uc #GirlsLead20

Markle, Obama and Chopra have all been vocal in their calls for women’s rights and social change. The Suits star delivered a speech at the UN Women’s Conference in 2015 where she recalled becoming an advocate for women’s rights at the age of 11, when she wrote a letter to then-First Lady Hillary Clinton complaining about a soap commercial that said, “Women all over America are fighting greasy pots and pans.”

She recounted that she received letters of support from Clinton and the TV channel, while the soap manufacturer changed the slogan from “women” to “people”. “It was at that moment that I realised the magnitude of my actions. At the age of 11, I had created my small level of impact by standing up for equality,” she said at the time.

Chopra, a Global UNICEF Goodwill Ambassador and philanthropist, was a guest at Meghan Markle and Prince Harry’s wedding in 2018. Michelle Obama, the founder of the Let Girls Learn education initiative, also sat for an interview for Markle’s guest-edited issue of British Vogue last year.