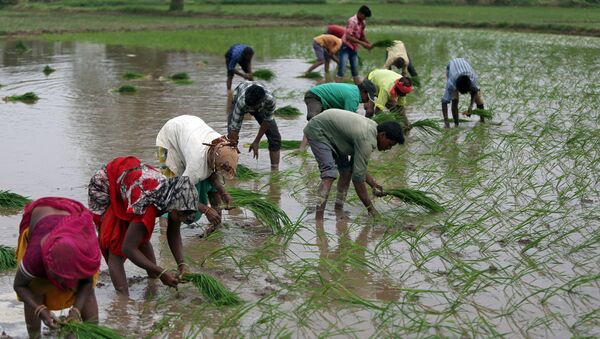 New Delhi (Sputnik): Prime Minister Narendra Modi last month urged Indians to go 'Vocal For Local' as he claimed that the pandemic had taught the nation the importance of self-reliance. Since then, the federal government has launched its 'Atmanirbhar Bharat' (self-reliant India) campaign, encouraging Indians to buy local products.

Farmers from the Indian state of Rajasthan are heading towards the national capital to lodge a protest against the Central government, accusing it of not buying their crops at the minimum support price (MSP).

The MSP is the government's way of insuring farmers against a sharp fall in the price of agricultural produce. The policy allows the government to buy the produce directly from farmers at a guaranteed minimum price.

But farmers belonging to the Kisan Mahapanchayat, a representative body of food producers, claim that the government has bought only 600,000 tonnes of Chana (chickpeas) out of a total 260 million tonnes.

"This is against the slogan of 'AtmanirbharBharat' (self-reliant India)," the president of the body, Rampal Jat, told media.

Farmers from #Rajasthan are on their way to #Delhi from #Dudu,to protest against Centre's crop procurement policies. Kisan MahaPanchayat's Rampal Jat says,"Centre has procured only 6 lakh tonnes of Chana out of total 26.75lakh tonnes.This is against slogan of '#AtmanirbharBharat" pic.twitter.com/wv7huIeH9W

The farmers want the government to buy their full agricultural produce at the minimum support price in the wake of the pandemic which has seen farmers incur sizeable losses, and they are seeking the support of the ​government-run Food Cooperation of India (FCI).

The farmers' body announced a march from Jaipur to Delhi on Sunday to protest against the decision to halt the purchase of chickpeas at the MSP.

Asking the state government to start the procurement immediately, the farmers warned of a march to Delhi to submit a memorandum to Prime Minister Narendra Modi if their demands were not met.

Highlighting the hardships faced by the farmers in the wake of the pandemic, Rajasthan State chief Ashok Gehlot had urged the federal government to increase the MSP procurement limit on agricultural produce to 50 percent from the current 25 percent.

The agriculture sector in India has suffered losses worth billions of dollars during the pandemic especially during the two-month lockdown in the country which was declared on 24 March, just before the harvesting season. While the government's MSP remains the same, the cost of labour has increased due to restrictions, making the process more cost intensive.