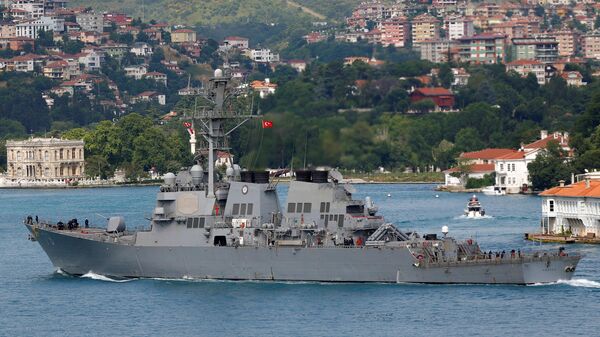 Ilya Tsukanov
All materialsWrite to the author
The US warship, which had entered the Black Sea in mid-June for interoperability drills with its allies in the region, came up on Russia’s radars immediately after doing so, with the Russian military promising to monitor the ship to be able ‘to promptly respond to any possible emergency situations’ that might arise.

The USS Porter, an Arleigh Burke-class guided-missile destroyer, began its exit from the Black Sea into the Mediterranean on Tuesday, the US 6th Fleet has announced.

“My crew and I enjoyed and greatly benefited from operating in the Black Sea alongside our regional partners, demonstrating our commitment to stability and security,” USS Porter Commanding officer Cmdr. Craig Trent was quoted as saying. “Training and working together not only make us a stronger force but are essential to building interoperability and joint-mission readiness,” he added.

The Arleigh Burke-class warship, which can be armed with as many as 90 Tomahawk cruise or RUM-139 VL-ASROC anti-submarine missiles, entered the Black Sea on 17 June, taking part in two drills involving the Bulgarian, Romanian, and Turkish navies, as well the naval forces of non-NATO partner Georgia.

Source Reveals Why NATO Warships in Black Sea Can’t Collect Intelligence Against Russian Fleet
Russia’s military began monitoring the USS Porter as soon as it entered the Black Sea, as it had during the warship’s previous deployments in the area. In addition to a substantive naval, aerial and coastal defence presence, Russia’s Black Sea deployment features cutting-edge electronic warfare systems which allow it to monitor virtually all military activity in the body of water, while simultaneously preventing NATO vessels from collecting any useful intelligence around the Crimea peninsula, home to the Russian Black Sea Fleet.

The US and other NATO powers regularly rotate naval forces in and out of the Black Sea. In accordance with the Montreux Convention of 1936, naval powers with no common border with the body of water have the right to stay in the Black Sea for no more than 21 days, and face tonnage restrictions.