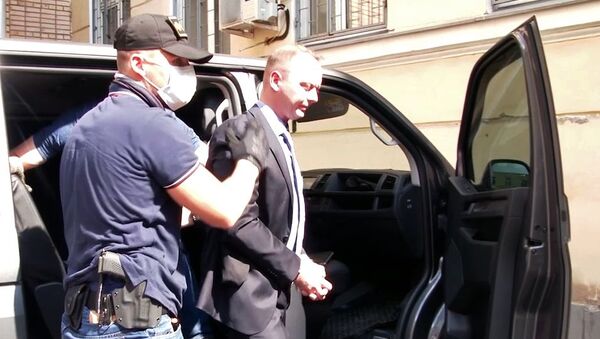 MOSCOW (Sputnik) - Ivan Safronov, an adviser to the head of Russian space corporation Roscosmos, denied on Tuesday his guilt in handing classified defence information to NATO, a Sputnik correspondent reported from a district court in Moscow.

"I do not admit guilt," Safronov said, as he entered the courtroom.

The court is now to decide on pre-trial restrictions.

Meanwhile, more than 10 people demonstrating in support of Safronov have been detained near the Federal Security Service's (FSB) headquarters in Moscow, according to a Sputnik correspondent.

Previous reports indicated that eight journalists, including those working for the Kommersant newspaper, Reuters news agency and Proekt media outlet, were detained there. However, after that, four more people have been detained and taken to a police van after they suddenly raised hand-made banners in support of Safronov.

Police officers dispatched to the scene say that the demonstration had not been authorised.

Safronov was detained earlier on Tuesday. Roscosmos said that the detention was not related to his work for the space agency. Before Roscosmos, Safronov for 10 years worked for Kommersant and Vedomosti newspapers, where he was covering topics related to defence and space industries. According to the Kommersant publishing house, the high treason accusations against Safronov are absurd, as he is a "true patriot."

Russian presidential spokesman Dmitry Peskov, in turn, said that the detention of Safronov did not appear to be connected to his work as a journalist.