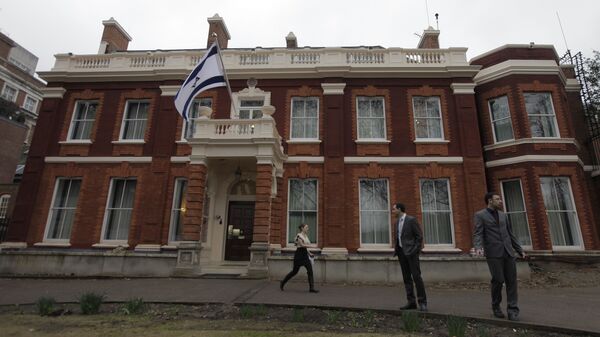 © AP Photo / Lefteris Pitarakis
Subscribe
Ilya Tsukanov
All materialsWrite to the author
The report comes amid media speculation that Israel may have been involved in the 2 July blast at Iran's Natanz nuclear power plant. Defence Minister Benny Gantz appeared to deny the claims on Sunday, saying “not every event that happens in Iran is connected to us”.

The plot, said to have been masterminded by Iran, was said to have involved embassies in Europe and around the world, although the list of specific countries where the attacks were meant to take place was censored by Israeli authorities.

The news channel did not elaborate on the details of the plot, and no attributable sources for the information were provided.

Iran has yet to comment on the alleged plot. However, in 2012, Israel accused the Islamic Republic of a similar scheme involving the Lebanese militant group Hezbollah and attacks against Israeli diplomats in India and Georgia. At that time, Iran categorically rejected the accusations, stressing that it “condemns all acts of terrorism,” and accusing “the Zionist regime” of waging “a propaganda war.” Four people were injured in the New Delhi attack. Georgian police foiled an attempted car bomb attack in Tbilisi. The 2012 attacks took place against the background of Mossad assassinations of Iranian nuclear scientists, with five scientists killed and one surviving in a string of attacks between 2010 and 2012.

Channel 12’s report comes amid rising tensions between Iran and Israel in the wake of the 2 July 2020 fire and explosion at a centrifuge production plant at the Natanz nuclear enrichment facility in central Iran. A previously unknown group calling itself ‘Cheetahs of the Homeland’ reportedly claimed responsibility for the act of sabotage.

After the attack, US media reported that “an explosive device planted inside the facility” was used in the attack. Later, Kuwaiti media accused Israel directly of involvement in the blast, claiming Israeli intelligence had carried out a cyberattack against the facility. On Sunday, the New York Times reported, citing an intelligence source, that Israel was responsible for the blast, and had planted a “powerful bomb” at the facility.

Israel’s Channels 12 and 13 provided varying estimates on how far the Natanz attack set back Iran’s uranium enrichment efforts, suggesting the country may have been set back between one and two years.

On Saturday, Iran’s Supreme National Security Council promised to reveal the “cause and nature” of the incident in due course, saying it was holding off from doing so “due to some security considerations”.

On Sunday, Israeli Defence Minister Benny Gantz hinted that Israel was not involved in the explosion, insisting that “not every event that happens in Iran is connected to us.” The same day however, Foreign Affairs Minister Gabi Ashkenazi said that Israel would continue to work to prevent Iran from obtaining a nuclear bomb, and said Tel Aviv takes “actions that are better left unsaid”. The top diplomat did not refer specifically to the Natanz incident directly.

IDF Chief: Iran ‘Most Dangerous Country in Mideast’, Threat to Israel Despite Lack of Common Border
Iran has promised to build a bigger and more advanced plant to replace the damaged enrichment facility.

Israeli officials have repeatedly warned the international community about Iran’s alleged pursuit of nuclear weapons, with Prime Minister Benjamin Netanyah successfully lobbying the Trump administration to pull out of the Iran nuclear deal in 2018 and stressing that Tel Aviv would not allow the Islamic Republic to build a nuclear bomb. Iranian officials have dismissed Israeli allegations, with Foreign Minister Mohammad Javad Zarif repeatedly pointing out that Israel is the only nuclear weapons state in the region. Tehran maintains that it has no intention of pursuing nuclear weapons. According to the latest International Atomic Energy Agency data, the country’s uranium enrichment levels are at 4.5 percent, well below the estimated 80-90 percent purity required to build a nuclear weapon.