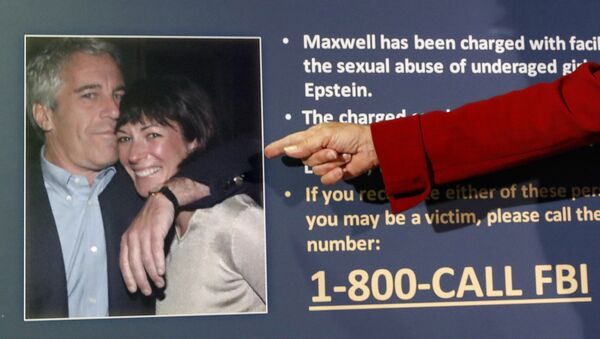 © AP Photo / John Minchillo
Subscribe
The forthcoming trial of Jeffrey Epstein’s co-conspirator Ghislaine Maxwell has the world on edge, anticipating the possible naming of additional members of his sex trafficking circle. According to one educator, it may have the possibility to fix a system that has been stacked against victims and survivors of sexual abuse.

Hannah Dickinson, associate professor at Hobart and William Smith Colleges and an organizer with the Geneva Women’s Assembly, noted Tuesday during her Women & Society segment on Radio Sputnik’s Loud & Clear that Maxwell facilitated, assisted and participated in Epstein’s sexual abuse of minor girls.

According to the Department of Justice release, “the victims were as young as 14 years old” at the time of the abuse and grooming carried out by Maxwell and Epstein, the latter of whom was a convicted sex offender.

Maxwell has since been transferred from a New Hampshire jail to the Metropolitan Detention Center in Brooklyn, New York, where she now awaits her July 14 Manhattan trial.

Dickinson explained that one of the reasons Maxwell’s charging is important is that it increases the chances of more victims and survivors being able to see justice carried out against their abusers.

“It opens up the possibility that some of the additional co-conspirators who were given a pass when Epstein was first tried for sex crimes … Ghislaine Maxwell was one of those co-conspirators,” she added.

By contrast, Epstein died in police custody in New York in August 2019 under suspect circumstances that have fueled theories he was silenced by powerful elites that feared his testimony.

Loud & Clear producer Nicole Rousell highlighted that the current moment is somewhat exciting because Maxwell’s trial will be a landmark, public case that may lead to further justice for survivors of sex crimes.

Dickinson applauded the work of investigative journalist Julie K. Brown of the Miami Herald, whose works she claimed assisted in investigators opening up the second investigation into Epstein, which led to his arrest in July 2019. Dickinson noted that Brown continuously questioned how Epstein’s entire network of co-conspirators was able to avoid prosecution and responsibility for their abuses.

She went on to emphasize that Maxwell played a key role in securing the young girls’ trust in Epstein’s circle, because even though promises of money alone were enticing, an adult woman being in on the plot provided potential victims with a false sense of security.

“It was Maxwell who really reassured these girls. You can imagine, a well-dressed, posh woman with a British accent rolls up in a nice car at your school and wants to take you shopping. That’s a far less threatening situation … than, say, Epstein driving up,” Dickinson said.

Nathalie Hrizi, an educator and political activist and the editor of Breaking the Chains, called attention to the fact that sexual assault, particularly against women, is carried out at all levels of society, including by those within law enforcement.

The prevalence of sexual abuse leads to the normalization of such acts and makes it difficult for victims to obtain justice, because the accuser is effectively put on trial, rather than the abuser, she explained.

“The way that society is organized is not in the interest of these girls [or] of working-class women at all. Maxwell and Epstein took advantage of that - they were aware of that,” Hrizi added.

000000
Popular comments
The system is beyond fixing as it's based on corruption and les.