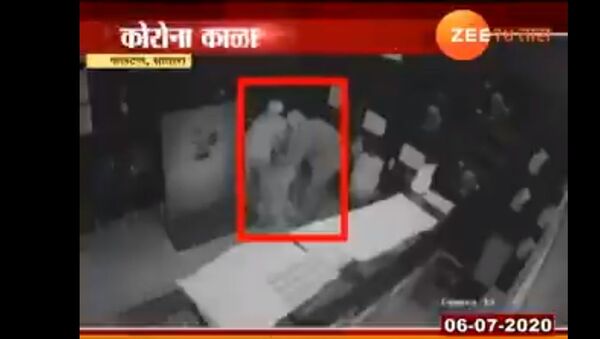 New Delhi (Sputnik): The Indian government has started the unlocking process and opened up several sectors and markets in order to revive the economy, but several states, including Maharashtra, have extended lockdowns until 31 July due to a rise in infections.

According to the police, the burglars entered the shop through a neighbouring side wall.

“CCTV footage from the shop, located near a containment zone in Satara district, shows three burglars taking hold of the gold jewellery from the showcases and cupboards within,” a senior police officer said.

In the video of the incident captured on CCTV the burglars are wearing caps, masks, plastic jackets and hand-gloves while taking the jewellery from the display cases.

The shop owner claims that the burglars fled with 780 gms of gold.

“Despite being captured in the CCTV footages, it is a task for us to recognise the accused as they were fully covered. We have formed several teams to nab the accused,” the officer said.

The incident occurred at a time when police forces are busy keeping an eye out for lockdown violators.

According to the federal Indian Health and Family Welfare Ministry, the country has over 719,660 cases of coronavirus and ore than 20,160 people have died due to the disease. A total of 439,948 patients have been cured or discharged.