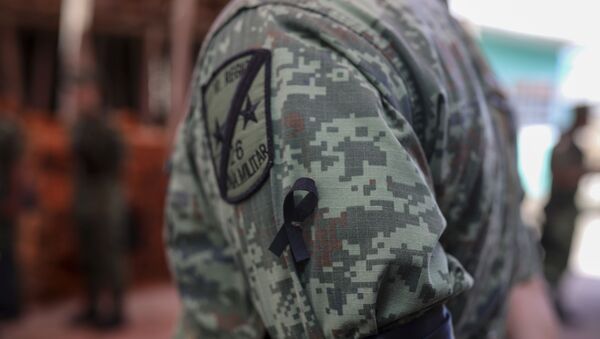 © AP Photo / Felix Marquez
Subscribe
The jet reportedly arrived from South America on Sunday and was tracked down as soon as it entered Mexican airspace.

Mexican authorities deployed military aircraft to follow a suspected drug smugglers' plane, which was detected over the country on Sunday,  but shortly found it ablaze on a jungle road on the Yucatan peninsular, The Yucatan Times reported.

A truck packed with 850 pounds (390kg) of cocaine, worth an estimated $4.9 million, was found in close proximity to the burning jet.

The drug smugglers are thought to have made an emergency landing and then set the twin-engine plane alight.

A top ranking Quintana Roo state police official shared footage of the burning aircraft from the scene on his Twitter account:

Troops were dispatched to the landing site, where at some point a shooting incident occurred, but there are no reports of arrests despite an investigation into the matter being promptly launched.

The plane, which is said to have arrived from South America, is reportedly a decades-old BAe-125 15-seat passenger jet which can cost up to $1 million. The loss of it, coupled with the massive drug seizure, would have a “significant impact on the criminal organisations” involved, the Mexican military said.

Аfter the fire was put out, the search operation for drug traffickers continued, with the support of the Navy, two “tanks” and a helicopter, theYucatan Times says. It is not immediately clear, though, what exactly the jet was loaded with.

The incident occurred amid escalating cartel violence in the country: most recently, there was a massive gun attack on a drug rehab clinic in which at least 24 people were killed.

Both the US, where Mexican drug dealers continue to smuggle their illicit goods, and Mexico are meanwhile continuing to track down members of the notorious Sinaloa cartel, with the US currently seeking the extradition of El Chapo’s son Ovidio, among others.

After becoming president in late 2018,  Andrés Manuel López Obrador pledged to halt drug cartel violence with policies focused on rooting out poverty and youth unemployment. However, according to fresh statistics, homicides in Mexico reached record levels during the first four months of 2020.