'They Do Not Speak For Me': Nicola Sturgeon 'Emphatically' Condemns Scotland Border Protestors 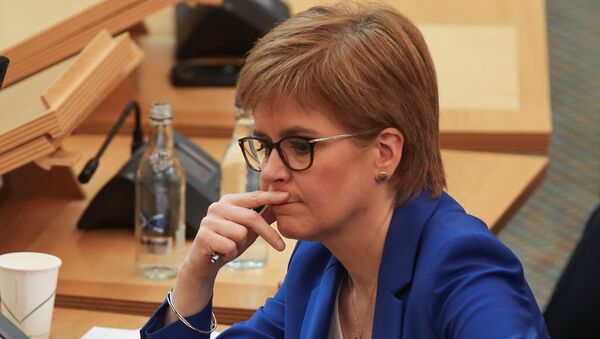 © REUTERS / POOL
Subscribe
The SNP leader and First Minister of Scotland has come under pressure after a small nationalist demonstration on the border of England and Scotland went viral.

Scottish First Minister Nicola Sturgeon disassociated herself on Monday from a group of masked protestors who tried to urge holidaymakers from England not to cross the border into Scotland.

The First Minister said the protestors did not speak for her and said that she “emphatically” rejected their message.

She explained that the conversation regarding erecting a border and travel restrictions between the two United Kingdom countries is not a "constitutional" or "political" matter but rather based on public health.

Sturgeon urged people not to protest at the border, saying it is not "sensible or helpful.

as requested Nicola Sturgeon clearly clarifies that she was not involved in the protest on the border.

​Donning white hazmat suits and masks, the demonstrators stood at the English border saying they want to keep Scotland “free of covid-19”.

Displaying banners of Sturgeons Scottish Nationalist Party and Scottish flags, they attempted to urge those traveling to Scotland to turn back.

In one video posted on social media, a protestor says "As you can see there are quite a few of us today".

“We are really laying it on thick so basically what we’re saying is, ‘Stay the f*** out".

Looks like Scotland's southern border has been found :)) pic.twitter.com/KN7t3E0SoE

​It comes amid pressure from the Scottish Tory leader Jackson Carlaw who called the scenes an "absolute disgrace". While speaking to the BBC, he urged the First Minister to "come out and stop that kind of rhetoric and language.”

The incident comes alongside an exchange between the Scottish government and Westminster, with suggestions that Scotland could stop all travel from England.

Boris Johnson's government has condemned the idea, with Commons Leader Jacob Rees-Mogg comparing the first minister to US President Donald Trump and his love of erecting walls.

Jacob Rees-Mogg - I never thought Nicola Sturgeon would want to model herself on Donald Trump & want to build a wall between England & Scotland... at least a metaphorical wall. #Bollocks pic.twitter.com/eKK3GNJjJf