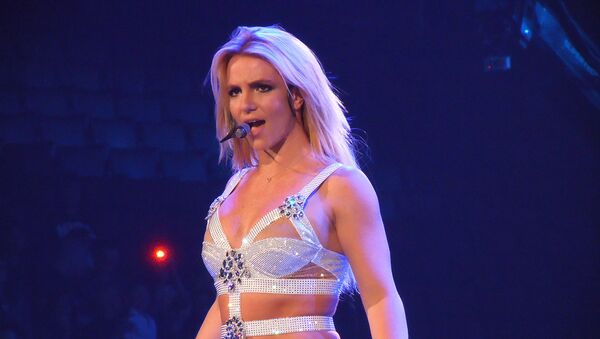 CC BY-SA 2.0 / hnkkk / Britney Spears - Femme Fatale Tour (Toronto)
Subscribe
After the US hip-hop artist announced he would be running for presidency some detail of his biography resurfaced, making the fans of another music icon, Britney Spears, fly off the handle.

On Sunday, the hashtag #freebritney started trending globally on Twitter after the pop princess's fans launched an online campaign to put an end to her conservatorship: in 2009 she had been appointed a legal guardian by a court due to mental health issues.

Few facts about Britney Spears' conservatorship and why #FreeBritney is very important issue:
- she can't drive or vote
- she has 10% custody of her children
- her calls and social media are being monitored
- she can't hire new lawyer (her current lawyer is corrupted) pic.twitter.com/4OirUzXQpl

More specifically, they are calling for the pop star to gain access to her own personal lawyer,  citing the case of her fellow musician, rapper Kanye West, who launched a presidential bid years after being at one point involuntarily kept in hospital due to mental issues for over a week.

Britney is a slave to the industry.
She has been since she was a young girl working for Disney. Unless a miracle happens they will never let her go.
Pray for her 🙏🏼

The system has failed her. She should’ve been assessed years ago for her capacity to care for herself #FreeBritney

Some even launched a petition arguing that her conservatorship, in limiting her rights, totally rules out the possibility of her choosing a lawyer so that she effectively challenge her legal status.

A few Britney fans have come forward and shared a change.org petition calling for the courts to allow Britney to pick her own attorney for the conservatorship case.

"With this conservatorship, she is unable to properly fight for her freedom as she isn’t legally allowed to hire her own lawyer. We need this petition so that Britney can hire her own lawyer and live a normal life as a 38-year-old woman with two kids,” one fan wrote, with another posting similarly:

"Britney’s situation is truly horrible and is a violation of human rights. There’s no reason why she should continue to be under a conservatorship. She doesn’t even have control of her own finances or children.”

A third said Spears “is one of the sweetest and most unproblematic celebrities out there,” arguing under the hashtag  #FreeBritney that the singer “doesn't deserve this” and should by all means enjoy “respect”, while some others pointed to certain inconsistencies in her diagnosis and subsequent schedule:

"Britney Spears’ father claimed she had DEMENTIA and was “unable to properly provide for herself”, to lock her in the conservatorship in 2008. A couple of months after this, that supposedly disabled woman was sent back to a rigorous work routine, including a world tour," one tweet read.

Britney Spears’ father claimed she had DEMENTIA and was “unable to properly provide for herself”, to lock her in the conservatorship in 2008. A couple months after this, that supposedly disabled woman was sent back to a rigorous work routine, including a world tour. #FreeBritney pic.twitter.com/ezL8VMMKR9

Britney Spears' hospitalisation and formal diagnosis were cited as reasons for the 2009 decision to appoint her a guardian, with the pop star known to have recently stayed at a facility for 30 days to review her treatment, the Blast reported.

However, in 2016 Kanye West was also hospitalised after suffering from "temporary psychosis" and held involuntarily for eight days. At the time, Kanye "hadn't slept in about a week" and was exhibiting "aggressive and terrifying" outbursts, according to Rolling Stone. The case was immediately recalled on the Internet, with pop fans specially pointing out that West was just treated with no conservatorship tabled at the time, giving Britney fans hope that she might gain the same freedom.

The proceedings in her court case have been delayed due to the raging coronavirus pandemic and the temporary lockdown of public institutions it has caused.