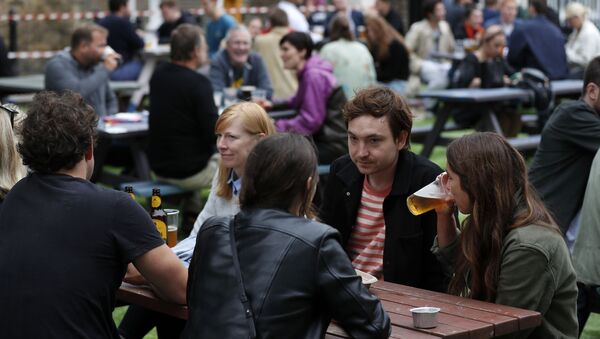 © AP Photo / Frank Augstein
Subscribe
Pubs, hairdressers and a number of other businesses reopened in England at the weekend but there was none of the mayhem which had been predicted. But social media appears to have divided those terrified of a second wave of the coronavirus and their detractors.

Twitter, Facebook and Instagram remains divided on Monday, 6 July, between those who fear the government’s easing of lockdown restrictions in England will lead to a "second wave" of coronavirus cases and those who are simply grateful for a return to some form of normality.

Most pubs in England reopened on Saturday, 4 July, without any major problems and with few signs of the drunken violence which some had predicted.

​The BBC reported that one pub - the Rockvilla Hotel on Merseyside - was forced to shut because it was so "overwhelmed" by drinkers that socially distancing was "impossible" to maintain.

But Health Secretary Matt Hancock told Sky News on Sunday: "From what I've seen, although there's some pictures to the contrary, very very largely people have acted responsibly. Overall, I'm pleased with what happened yesterday. It was really good to see people out and about, and largely socially distancing."

​Britain has the highest death toll in Europe - 44,198 - from COVID-19 and Boris Johnson’s government has been widely criticised for its handling of the pandemic.

Many people have criticised Mr Johnson and Mr Hancock for easing the lockdown when there are still large numbers of coronavirus cases in England.

​They fear a "second wave" such as that which has hit several other countries, including the United States, Germany, Iran, Saudi Arabia and Kazakhstan.

​Jbrowny91 tweeted a photograph of crowds of drinkers outside pubs in Soho on Saturday night with the caption: “If there’s ever been a picture to sum up how f***ing stupid and selfish the UK public is it’s this. #SecondWave.”

​Another Twitter user posted a similar picture and wrote: “These people can shove the clapping (for the NHS) where the sun doesn’t shine. I’d much rather you had your beer at home. F***ing idiots. #SecondWave”

But the fearmongers have been given as good as they get on social media.