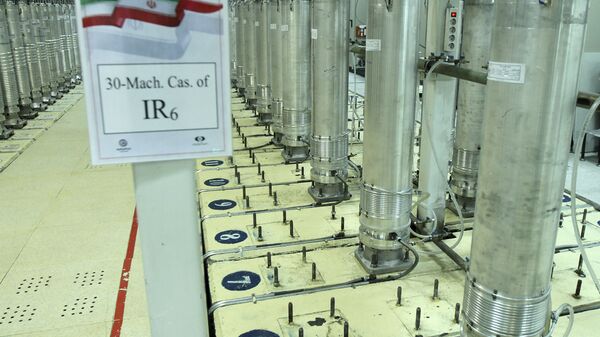 A 2 July blast at the Iranian Natanz nuclear power plant significantly damaged the above-ground part of the building. Against this background, reports emerged, citing unnamed Iranian officials, suggesting that Israel was behind behind the incident.

Israel is responsible for the explosion at Iran's Natanz nuclear site, by means of a  "powerful bomb", The New York Times reported, citing an unnamed source described as a Middle East intelligence official.

According to the Nytimes.com source, the incident is not connected with other explosions that took place in Iran earlier, in particular a blast near Tehran's Parchin military complex, which some reports have suggested is a missile production facility.

Earlier in the day, former national security adviser John Bolton questioned whether the recent explosions could have been connected and represented "a precursor of a larger attack".

The NYT also cited a member of the the Islamic Revolutionary Guards Corps (IRGC), who confirmed the explosive at the Natanz site, adding that investigators "have considered the possibility" that "a cruise missile or a drone" was used to attack Natanz, but saw a bomb scenario as more likely.

"The episode will probably accelerate plans to move more of Iran’s most sensitive facilities underground", the IRGC member reportedly said.

The damage caused by the incident was described by Behrouz Kamalvandi, a spokesman for the Atomic Energy Organization of Iran, as "significant", and he noted that it could slow the development of cutting-edge uranium enriching centrifuges.

The cause of the incident has not yet been officially confirmed, but some reports suggest that Iran's Supreme National Security Council (SNSC) has determined the reason behind the episode, and the facts will be announced "at a proper time".

Responding to unconfirmed media reports that suggest Tel Aviv's involvement, Israeli Defence Minister Benny Gantz stated that "not every incident that transpires in Iran necessarily has something to do with us", however he repeated that "nuclear Iran is a threat to the world and the region".

Israel consistently opposes an Iranian nuclear program, claiming that Tehran will destroy the Jewish state if it obtains nuclear weapon.