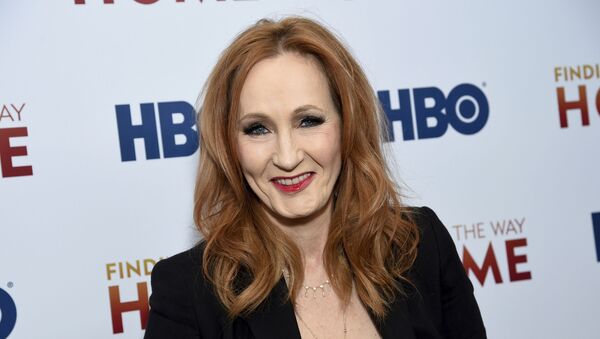 Joanne Rowling, the legendary author of the Harry Potter series, is currently facing a new backlash over her views on transgender issues which started in the beginning of June after she pointed out, in response to a Devex article, that “people who menstruate” can be simply called 'women'. She was soon accused of transphobia for her views.

JK Rowling was called a “threat to LGBT people” and a “dangerous” person by transgender model Munroe Bergdorf after the writer has recently decided to address “a new kind of conversion therapy for young gay people” that, according to her, would put them “on a lifelong path of medicalisation”.

“Many health professionals are concerned that young people struggling with their mental health are being shunted towards hormones and surgery when this may not be in their best interests,” Rowling wrote on Sunday in a long Twitter thread, discussing mental health medication and transgender challenges.

Many, myself included, believe we are watching a new kind of conversion therapy for young gay people, who are being set on a lifelong path of medicalisation that may result in the loss of their fertility and/or full sexual function. 5/11

“As I’ve said many times, transition may be the answer for some. For others, it won’t – witness the accounts of detransitioners," she added.

One of her tweets was soon targeted by Bergdorf, the UK’s first transgender model for L’Oréal brand, who argued that “trans healthcare” was not a “conversion therapy”, labelling Rowling’s views threatening.

Mark my words. J.K Rowling is dangerous and poses threat to LGBT people.

Trans healthcare is not conversion therapy.

“J.K. Rowling is not a scientist. She is not a doctor. She is not an expert on gender. She is not a supporter of our community,” the model and activist wrote shortly after. “She is a billionaire, cisgender, heterosexual, white woman who has decided that she knows what is best for us and our bodies. This is not her fight.”

While @jk_rowling is condescendingly tweeting from her mansion, black trans women are fighting for our lives. Trans kids are at home scared and navigating unsupportive environments and the government are debating our civil rights.

J.K. Rowling, you are not helping us.

The Harry Potter author did not yet comment on Bergdorf’s criticisms, which came as a new development in a line of accusations Rowling has been facing since June, after mocking a Devex article titled “Creating a more equal post-COVID-19 word for people who menstruate.” Rowling wondered whether the article was actually referring to “women” but was soon accused of “transphobic” views, as many insisted that transgender men were also able to menstruate, while many transgender women were not. The author, however, defended her views, arguing that sex was still important as a biological category highlighting derogatory experience of many women worldwide, including her own, and thus should not be “erased”.

“I know and love trans people, but erasing the concept of sex removes the ability of many to meaningfully discuss their lives. It isn't hate to speak the truth,” Rowling argued back then.

However, the string of accusations and criticisms towards the author still continued, as many celebrities, including Harry Potter star Daniel Radcliffe and American writer Stephen King, soon came to argue that transwomen were “women”.