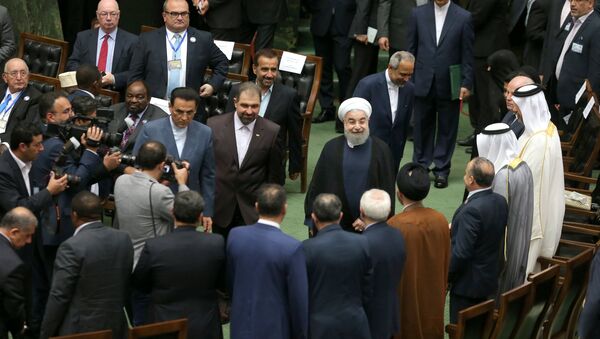 A group of 120 lawmakers from Iran’s 290-member Islamic Consultative Assembly parliament have signed a motion to question President Hassan Rouhani over economic difficulties facing the country, as well as Europe’s failure to implement the 2015 nuclear deal, Tasnim News Agency has reported.

“The lawmakers have various questions for the president, including the reasons behind the foreign exchange market crisis as well as the high cost of basic goods and basic necessities of the people today,” Eqbal Shakeri, a lawmaker from Tehran, was quoted as saying.

Other concerns include the disruption of the housing market, inflationary pressures, and lack of loan support for enterprises. A third block of questions asks why the European powers are not committed to fulfilling their obligations under the nuclear deal while demanding that Iran fulfills its commitments, and whether or not it may have been a mistake for Iran to sign on to the nuclear deal which the US so easily and painlessly withdrew from in 2018.

The motion has been handed off to the presidium, and it will be up to that body to determine whether or not to move forward with questioning. Previously, Supreme Leader Ayatollah Ali Khamenei urged his nation’s leaders to remain united amid ongoing US pressure against Tehran. Khamenei previously blocked a parliamentary bid to impeach Rouhani’s predecessor, Mahmoud Ahmadinejad, in 2010.

Facing suffocating US sanctions following the Trump administration’s unilateral withdraw from Joint Comprehensive Plan of Action nuclear deal in May 2018, the Rouhani government has sought to make a shift toward self-sufficiency and import substitution, away from dependence on oil exports. For the most part, the country’s traditional partners in Europe and Asia have succumbed to US threats of secondary sanctions, and have halted or severely reduced the purchase of Iranian crude oil.

At the same time, the JCPOA’s European signatories have demanded that Iran continue to live up to its commitments under the nuclear deal, while failing to find a way to ensure sanctions relief for the Islamic Republic, as stipulated under the deal.

Iran’s economic woes have been complicated further starting in early 2020 by the coronavirus crisis, with the nation hit hard by the pandemic, and its initial response weakened by sanctions targeting the import of medical equipment and medicines. Tehran has repeatedly urged Washington to lift its sanctions on a humanitarian basis, but the US has refused. The Trump administration also blocked a $5 billion loan request from the International Monetary Fund.

Iran’s currency, the rial, slid to a new low against the US dollar on the unofficial currency market in early July, dropping from 208,200 rials per USD on Friday to 215,500 rials per USD Saturday. Since Trump’s scrapping of the nuclear deal, the rial has lost about 70 percent of its value against the dollar.

On Sunday, Rouhani accused Iran’s foreign enemies of mounting a “psychological operation” to try to stop the country’s push toward an economy not dependent on oil exports. He noted that the main economic indices have maintained a positive trend despite US sanctions and the coronavirus. He also promised a stabilization and normalization of markets once economic activity and trade put on hold by the coronavirus crisis resume.