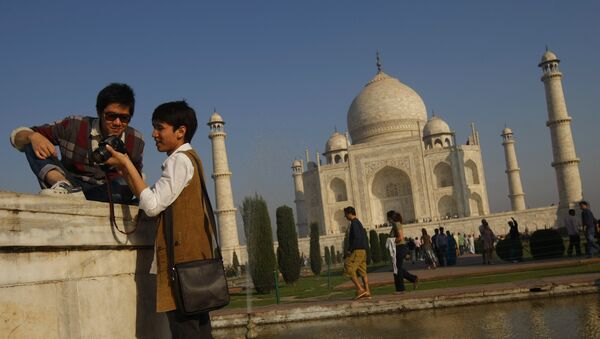 New Delhi (Sputnik): India now has the third-highest number of coronavirus cases in the world, surpassing Russia. India is now trailing only the US and Brazil, with 697,413 infection cases. The country is undergoing a phased reopening programme to bring normalcy and reverse an economic collapse.

Caught between trying to introduce a 'new normal' by reopening its economy and a mounting caseload, India has deferred a plan to reopen the iconic Taj Mahal and other monuments in the city of Agra.

The Taj Mahal, a UNESCO-listed world heritage site and one of India's most popular tourist destination, is located within a containment zone and therefore will remain closed to potential visitors who normally flock to see the entrancing 17th century historical marvel.

As per the central government’s Unlock 2.0 strategy, all historical monuments protected by the federal Archaeological Survey of India (ASI) were slated to be opened on Monday to domestic tourists. However, the final decision was left to state authorities, who have been directed to restrict all kinds of movement within containment zones.

In Agra, located in the state of Uttar Pradesh, other major monuments, including Agra Fort and Sikandra - the tomb of Mughal emperor Akbar the Great, will remain closed.

The shining white marvel, like all the historical monuments across the country, has been closed since mid-March, leaving a dent in tourism revenues.

Indian government's agency responsible for historical sites, ASI, has over 3,000 monuments under its jurisdiction. Most of them, including Qutub Minar, the Red Fort and others in Delhi, are open for business this week.

Meanwhile, the move comes as India posted enough coronavirus case tolls to make it the third-worst-hit country today, surpassing Russia with 697,413 total cases and 253,287 active cases. A total of 424,433 people have been discharged from the hospitals after receiving treatment, but 19,693 have succumbed to the contagion.