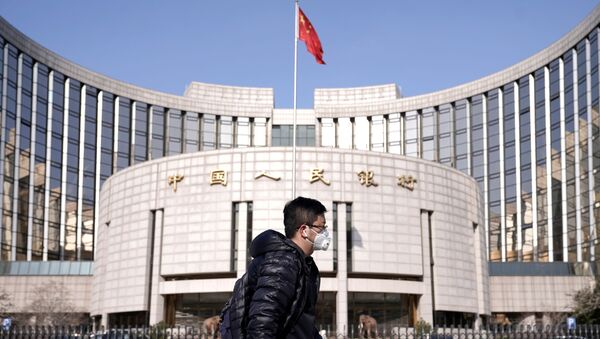 Demond Cureton
All materialsWrite to the author
The new measures target 38 illegal shareholders who will be purged from banks and insurance companies, a major Chinese banking regulatory watchdog announced in a statement on Saturday.

China will begin purging its banking industry of illegal shareholders accused of stealing funds for personal use, the Financial Times reported on Monday.

The Chinese Banking and Insurance Regulatory Commission (CBIRC) has targeted companies with ties to Baoshang Bank and Anbang Insurance, who were issued a $10bn government bailout last year.

The "investigation and punishment of illegal shareholders" was important to mitigate financial risk and improve corporate governance in the banking and insurance industries, CBIRC said in a statement.

Existing and potential investors in the insurance industry should "draw lessons from it, use it as a warning, and effectively restrict their own behaviour" by carrying out activities "in accordance with the law", the statement added.

The announcement comes after former Baoshang Bank head, Xiao Jianhuai, was detained at a luxury hotel during the Chinese Lunar New Year in Hong Kong in 2017 after being charged with bribery and manipulating stock prices.

The Chinese-Canadian billionaire was charged with “manipulating stock and futures markets" as well as "offering bribes on behalf of institutions”, a source quoted by the South China Morning Post said at the time.

Ten companies with holdings in Baoshang Bank and a further ten linked to Chengdu Rural Commercial Bank were named in the list, with the latter controlled by former Anbang Insurance chairman Wu Xiaohuei.

Anbang Insurance, who also received $10bn from Beijing, was taken over by the Chinese government in 2018 after Mr Wu was sentenced to 18 years for illegally distributing funds to the former chairman's business networks, local media reported.

Mr Zheng, who had accused foreign media of colluding with protestors in the 2011 Wukan village riots, was appointed to implement a national security bill set to enter force in August.

US lawmakers passed a bill on Tuesday sanctioning banks doing business with Chinese officials involved in the new security law, with US officials alleged Hong Kong could lose "political autonomy" following the special administrative region's transition from the United Kingdom back to mainland China in 1997, where it adopted a "one country, two systems" policy.