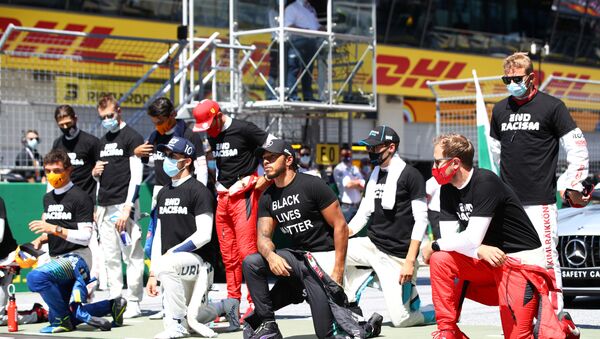 Formula One started its delayed 2020 season on 5 July with the holding of the first race in Austria without spectators due to the COVID-19 pandemic.

The 20 drivers at the race have divided over the topic and were unable to reach a unanimous conclusion. However, they all have agreed to wear End Racism t-shirts when the pilots lined up at the front of the grid for the Austrian national anthem ahead of the race.

There you go - a mix of kneels and stands from drivers #F1 #AustrianGP pic.twitter.com/uBRhKry1fI

​Photos and videos of the moment have been widely shared on social media networks, with netizens divided on the matter. Some of them supported the move, while other have condemned the pilots for not supporting the black American movement.

We fucking love those ones pic.twitter.com/9oiIDYkSNu

The event is being held as amid the global protests against racism that have been sparked by the killing of black American former convict George Floyd by police officers in Minneapolis. The demonstrators often kneel on one knee to honour all African-American lives lost to police violence in the United States.