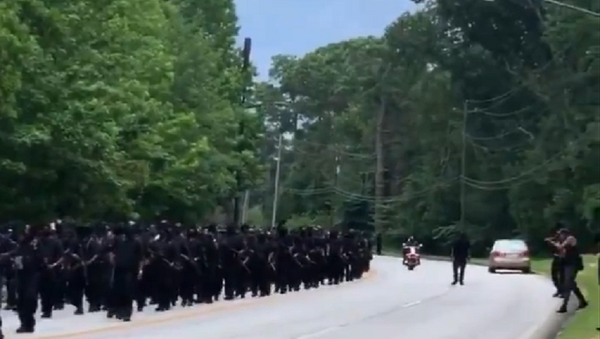 Georgia's Stone Mountain Park is notable for a rock relief of three Confederate figures - Jefferson Davis, Robert E. Lee, and Stonewall Jackson. The mountain has been mired in controversy due to its Confederate symbolism as well as being a gathering spot for the Ku Klux Klan, where it was "reborn" in the early 20th century.

A video of a march held by heavily-armed predominantly black men in Georgia's Stone Mountain Park has been circulating on social media. In the video, the protesters are seen carrying rifles and calling for the removal of the monument to the president of the Confederate States of America and its two best-known generals.

One of the men had a loudspeaker and is heard calling out right-wing groups.

“I don’t see no white militia, so to the Boogie Boys, the Three Percenters and all the rest of you scared-*ss rednecks: we’re here… We’re in your house. Let’s go. NFAC!", the man was filmed saying. The abbreviation apparently refers to the organisers of the march and stands for ‘Not F**king Around Coalition.’

Calls for the removal of Confederate monuments have intensified since the killing of African-American former convict George Floyd in late May in police custody, which triggered mass protests against racial inequality and police violence.

A number of monuments and statues of figures associated with black slavery have been vandalised or torn down by protesters over the past several weeks, prompting President Trump to sign an executive order to protect commemorative sites. Those violating the new law could face up to ten years in jail.