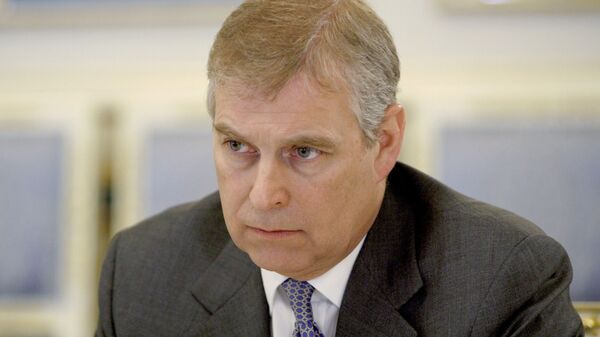 Paedophile Jeffrey Epstein’s suspected associate, now charged with personally being involved in child sex abuse, was reportedly "very sorry" after the Duke of York’s compromising Newsnight interview because she "had put him in that position".

Indicted socialite Ghislaine Maxwell repeatedly warned Prince Andrew not to speak to the media about their paedophile pal Jeffrey Epstein, the socialite’s confidante Laura Goldman claimed as cited by the Mirror.

She added that the royal ignored her urging and agreed to a sit-down with BBC Newsnight's Emily Maitlis, which only raised further questions about his ties to Epstein. The royal, the former stockbroker Goldman recalled, told Maxwell after the car-crash interview: "Don’t worry, it’ll work out".

Hinting Maxwell knew she would be inevitably arrested, Goldman said the socialite believed it was terrible and depicted it as "the beginning of the end".

"We knew things were bad. I think part of her protections went away", Goldman shared, saying the British socialite reiterated to Prince Andrew, who she's reportedly known for 40 years, that talking to the press wouldn't do them any good as "nobody wants to hear what we have to say".

Asked what Maxwell said to Andrew after the disastrous TV interview, Goldman said: "She told him she was very, very sorry she had put him in that position and asked what she could do to make it up to him".

Goldman specified that although Maxwell and Andrew had first met each other while at university, they only developed a real friendship in the 1990s, with the socialite feeling he had "saved her and stood by her" after her father died and had even helped launch her into New York society, where she settled down at the time. This is what will reportedly make Maxwell abstain from talking about the royal to US investigators in connection with the Epstein case.

Goldman's account of the events came as the British socialite was arrested by the FBI at her £860,000 home in Bradford, New Hampshire. Maxwell, who has been shunning the public eye since Epstein’s suicide in August 2019, is charged with procuring underage girls for Epstein to have sex with and  engaging in sexual activity with them herself. Overall six different charges, including an earlier perjury in court, were brought against her, and if found guilty she faces up to 35 years behind bars. She currently denies any wrongdoing.

Maxwell has been a friend of Prince Andrew, now 60, since the mid-1990s. The socialite was also said to have been around the night Epstein's "teenage sex slave" Virginia Giuffre claims she had sex with the Duke of York at Maxwell's London house in March 2001.

Andrew has vehemently denied any misconduct or having sex with minors. His lawyers have said the prince offered three times to be a witness, lamenting the US prosecutors didn’t respond but instead insisted he had provided "zero cooperation" with the Department of Justice.

Speaking about Goldman’s comments, a source close to the prince's legal team said as cited by the Mirror:

"None of this brings victims of Epstein any closer to justice, nor does it explain why the DoJ continue to focus their efforts on the Duke, who met Epstein less then 10 times, 20 years ago".

The death of Epstein, who had earlier already been convicted of paedophilia, in August 2019 was ruled to be suicide but yet triggered numerous conspiracy theories involving the rich and powerful who he was known to have rubbed shoulders with - top businessmen, socialites, and politicians among them.