Video: Turkish Coach Enjoys Paragliding, Sitting on His Sofa, Watching TV, Having Chips, All at Once 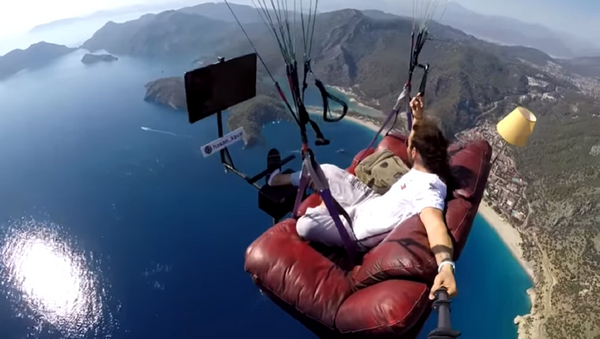 Muhammad Osman
All materialsWrite to the author
Are you a couch potato in love with relaxing at home and watching favorite films and TV shows? Want to try paragliding but too lazy to leave your sofa? What about doing both activities at once? Like the idea? Here is someone who managed to make this come true.

Hasan Kaval, a Turkish paragliding instructor, has done something many couch potatoes only dream about. He took his sofa and TV with him on a journey to the sky.

Kaval attached a wheeled sofa and a TV to one of his paragliders before taking to the sky from a cliff. The coach filmed the whole journey on camera.

The man appeared in the video siting relaxed on his couch, not even strapped in, watching ‘Tom & Jerry’. Moreover, he took off his shoes during the flight and exchanged them with slippers, before casually eating chips and soda, while flying over water.

After landing safely, Kaval said that he felt secure and relaxed during the whole flight.

"Today, I realized the project that I had in mind for over two years. I would like to express my endless thanks to my friend @ flyferhat1973, who supports me in all aspects from the beginning to the end of the project," Kaval  wrote on Instagram.