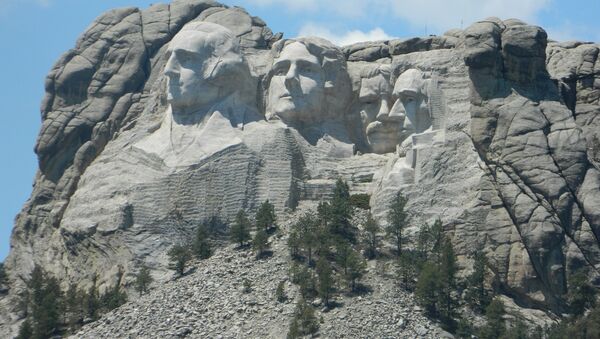 Subscribe
US President Donald Trump is scheduled to hold a 4th of July rally at Mount Rushmore, South Dakota, on Friday evening. Alongside a congratulatory speech from the president and other officials, the event's program will include military flyovers and fireworks.

As the coronavirus pandemic alters the celebration of Independence Day in the United States, stripping Americans of the opportunity to have a beer and a BBQ with their peers in the park, there will still be an event at Mount Rushmore, as US President Donald Trump arrives for a rally.

Trump is to deliver a congratulatory speech, expected to be followed by a fireworks show above the iconic US monument. South Dakota Republican Gov. Kristi Noem noted that there will be no social distancing guidelines, and about 7,000 tickets were reportedly secured for the event.

​Hours before the 4th of July event, anti-Trump protesters briefly blocked the road to the monument, using vans with removed tires. The block is seen as potentially difficult to remove.

Indigenous protesters at Mount Rushmore (sacred Lakota land) have removed the tires from the large white vans in the background, creating a road block that will be very difficult to move.

​As protesters gathered around the roadblock, climbed the vans and waved flags, the National Guard, along with police arrived on scene to disperse the crowd. The blockade created by the demonstrators was later towed down the mountain.

#BREAKING: National guard is working to disperse protesters who have formed a blockade leading to Mount Rushmore where President Trump will deliver a 4th of July speech. pic.twitter.com/XeZaTdLwka

Protesters Bus’s being towed down the mountain. #MtRushmore #Protesters pic.twitter.com/MaGRlOgQ44

During her speech at the Mount Rushmore event, Governor of South Dakota Kristi Noem called for not destroying history and "imitating what's good about it".

"Let's not destroy the history, let's learn from it by preserving and imitating what is good about it", she said in the speech.

Photo and video of Blue Angels flying over Mount Rushmore during the event marking Independence Day were shared on social media. As the national anthem concluded, the jets crossed the sky over the site.

The @BlueAngels just conducted a fly over of the Mount Rushmore National Memorial at the conclusion of the national anthem. #independenceday2020 pic.twitter.com/7YBuG0a7L5

Loving me some BLUE ANGELS at the Mount Rushmore Celebration! pic.twitter.com/wfC13pVQNW

000000
Popular comments
Thank you for covering this pivotal event! I turn to CNN, America's "premier news network", and all I find is a n hour-long special report on bats. Talk about irrelevant!

RWE2
4 July 2020, 06:24 GMT1
000000
The "monument" will never be desecrated...yeah, monument indeed, to the greed on which that country is based, built by desecrating the sacred grounds of the rightful owners...