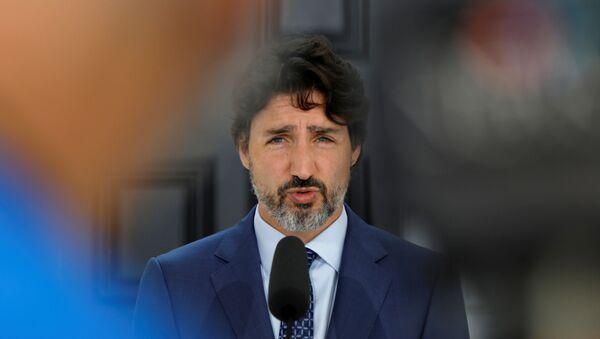 Muhammad Osman
All materialsWrite to the author
On Wednesday, the US-Mexico-Canada trade agreement (USMCA) entered into force, replacing the North American Free Trade Agreement (NAFTA), signed in 1993 and repeatedly denounced by US President Donald Trump as a “disaster”. The leaders of Canada and Mexico have been invited by the US president to celebrate the new deal in Washington next week.

Canadian Prime Minister Justin Trudeau told reporters on Friday that he may not participate in a trilateral summit with US President Donald Trump and Mexican President Andres Manuel Lopez Obrador in Washington next week.

In response to a reporter's question on whether he intended to accept the US president’s invitation to the summit set for 8-9 July to mark the USMCA deal, the prime minister said he would consider the recent US threat of imposing fresh tariffs on Canadian goods and the coronavirus pandemic before making final decision on the matter.

“We’re still in discussions with the Americans about whether a trilateral summit next week makes sense,” Trudeau said. “We’re obviously concerned about the proposed issue of tariffs on aluminum and steel that the Americans have floated recently. We’re also concerned about the health situation and the coronavirus reality that is still hitting all three of our countries.”

The Trump administration has been pressuring Ottawa to cut its aluminum exports, vowing to implement a 10-percent tariff if the nation refuses to meet the demands of the White House, according to POLITICO, citing sources claiming to be familiar with the matter.

Last month, US Trade Representative Robert Lighthizer reportedly informed the Senate Finance Committee of a surge in imported steel and aluminum, predominantly from Canada, along with some from Mexico, just few weeks before the USMCA trade pact went into force, according to the outlet.

In 2018, the Trump administration imposed tariffs on Canadian and Mexican steel and aluminum exports, citing national security. The White House suspended the tariffs after one year. Ottawa, at the time, responded by imposing levies on US various goods.

The USMCA deal reportedly states that Washington could reimpose those tariffs “in the event that imports of aluminum or steel products surge meaningfully beyond historic volumes of trade over a period of time.”

On Monday, Trudeau told reporters that the reimplementation of US tariffs on Canada’s aluminum would raise input costs for US manufacturers, which would negatively affect the US economy.

“We have heard obviously the musings and proposals from the United States [that] perhaps there needs to be more tariffs on aluminum,” Trudeau said Monday. “What we simply highlight is the United States needs Canadian aluminum. They do not produce enough, nowhere near enough aluminum in the States, to be able to fill their domestic manufacturing needs.”

The pact is touted as adding $68.2 billion to the US GDP and creating 176,000 new jobs in the country, according to Semsar.