US-Russia-China Arms Race Would Be Destabilising, Detrimental for All, State Department Says 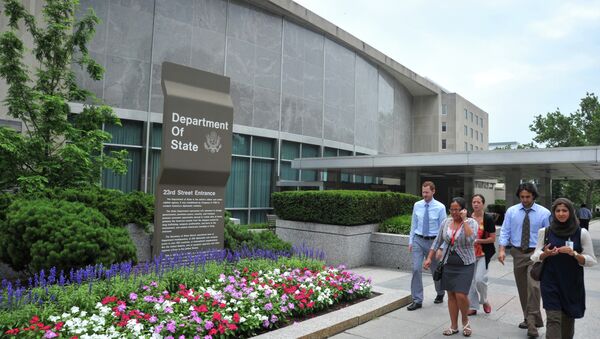 © AFP 2021 / Karen BLEIER
Subscribe
WASHINGTON (Sputnik) - The United States stands for effective and verifiable arms control and does not seek arms race with Russia and China, a scenario that would be detrimental for all, a State Department official stated.

"The United States remains committed to effective arms control that advances the US, allied, and partner security; is verifiable and enforceable; and includes partners that comply responsibly with their obligations", the official said.

According to the official, President Donald Trump "has charged this Administration with beginning a new chapter by seeking a new era of arms control that moves beyond the bilateral treaties of the past".

The US thus urges Russia and China to "join us in this opportunity to deliver real security results to our nations and the entire world", the official went on.

"A three-way arms race would be destabilising and would not increase security for either China or Russia", the official warned.

The official continued on by saying that the United States remains committed to the international arms control, but China needs to join the talks with the US and Russia.

"China must reconsider its absence and join in these discussions. President Trump wants a trilateral agreement that fits the current security environment in which China and Russia are arms racing", the US diplomat said.

China has an obligation under the Treaty on the Non-Proliferation of Nuclear Weapons that requires it to hold talks "in good faith on effective measures leading to nuclear disarmament", the State Department official added.

"China is quickly building its nuclear arsenal. They seek to double their nuclear capabilities over the next decade. There has been talk of 1,000 warheads. Beijing wants a triad of capabilities with ground-based launchers or ground-based missiles, submarines, and bombers. This is not a minimal deterrent. A three-way arms race would be destabilizing and would not increase security for either China or Russia", the US diplomat said.

He also stated that China's plans to create a triad of air-, sea- and land-based nuclear weapons went against its strategy of minimal deterrence.

The official said China was rapidly building its nuclear arsenal in an effort to double nuclear capabilities over the next decade. It claimed Beijing's goal was to increase its stockpile to 1,000 warheads.

US Likely to Soon Decide Not to Extend New START Treaty - Russian Deputy Foreign Minister
China refused to sit down with the US and Russia in Vienna on 22 June to discuss the future of the last major arms control pact, the New START, which expires in February. Beijing argues it has only a fraction of nuclear arsenals wielded by the two rivals.

The New START is the last remaining arms control treaty in force between Russia and the United States after the collapse of the Intermediate-Range Nuclear Forces Treaty in 2019. The New START stipulates the reduction of the number of strategic nuclear missile launchers by one-half and limits the number of deployed strategic nuclear warheads to 1,550.

Russia wants the current deal to be extended by another five years, while the US insists on trilaterising the pact to include China, which has rejected the invitation to join.

Russia and the US are each estimated to have slightly over 6,000 warheads, while China has 290, France 300 and the UK 200, according to the 2019 figures provided by the US-based Arms Control Association.

000000
Popular comments
For now I see only one side losing the battle. The one that still doesn't have hypersonic technology despite it's astronomical "defense" budget...no, Hollywood prototypes don't count.

Itsme
3 July 2020, 21:49 GMT6
000000
Wasn't it the Gringostan who abandoned the old Start treaty? Besides the Gringos are some deluded hasbeens that nobody cares about anyway.