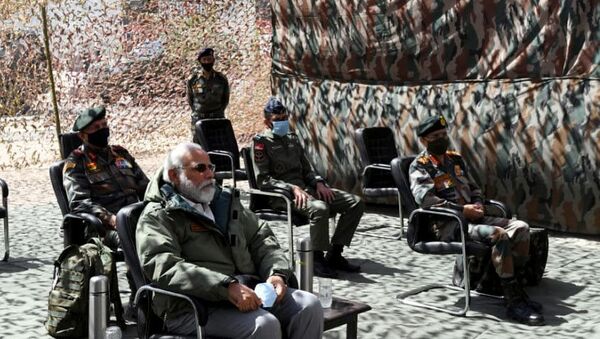 © REUTERS / PRESS INFORMATION BUREAU
Subscribe
New Delhi (Sputnik): Tensions between India and China have been ongoing despite several meetings between diplomats and army commanders on both sides in the wake of a violent standoff in which 20 Indian soldiers were killed.

Indian Prime Minister Narendra Modi has arrived in Ladakh for a surprise visit amid a military build-up weeks after violent clashes between the armies of India and China on 15 June. India lost 20 soldiers, including an officer, while there was no formal confirmation of casualties on the Chinese side.

PM @narendramodi reaches #Ladakh on a surprise visit to one of the forward locations in Nimu at 11,000 ft; he is interacting with personnel of @adgpi, Air Force and ITBP; Chief of Defence Staff General Bipin Rawat and Army Chief MM Naravane are accompanying him pic.twitter.com/EmrXmTWmHm

​Chief of Defence Staff, General Bipin Rawat and Chief of Army Staff, General Manoj Mukund Naravane, are also accompanying Prime Minister Modi, who will review the situation on the ground along with the commanders.

Upon his arrival in Ladakh, Modi went to Nimu, one of the forward locations, where he interacted with personnel from the armed forces. Nimu is located at 11,000 feet and among the toughest of terrains, surrounded by the Zanskar Range and on the banks of the River Indus. 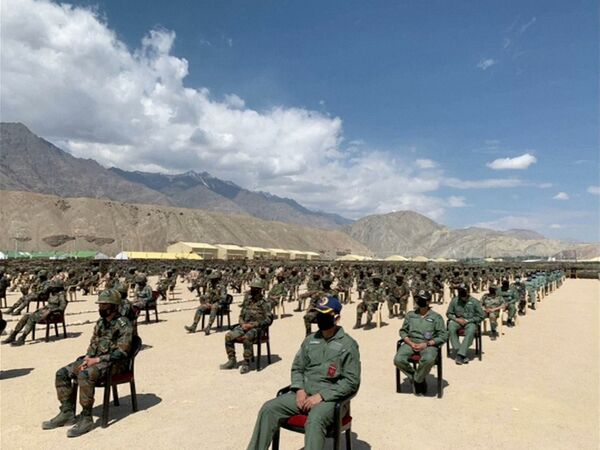 Amid reports of a continuing build-up by the People's Liberation Army of China near the disputed Line of Actual Control, which is the de facto border between the two countries, New Delhi cleared a procurement of 21 MiG-29s and 12 Su-30 MKI planes, in addition to an upgrade of 59 MiG-29 aircraft.

New Delhi and Beijing, in the meantime, have voiced hope for a peaceful resolution to the vexed border dispute.

“The two sides will continue their meetings both at the military and diplomatic level including under the framework of WMCC (Working Mechanism for Consultation and Coordination on India-China Border Affairs), in the future to resolve the issues to mutual satisfaction", said a spokesperson for India’s External Affairs Ministry on Thursday.

“We hope the Indian side will work with the Chinese side towards the same goal, keep up close communication through military and diplomatic channels, and ease the situation and lower the temperature along the border", said Chinese Foreign Ministry spokeperson Zhao Lijian on Wednesday.

The last engagement between the army commanders of both countries was held on 30 June at Chushul on the Indian side of the LAC to “discuss issues related to disengagement at the face-off sites along the LAC and de-escalation from the border areas".

The 15 June standoff was the latest clash between India and China on Beijing’s contentious claim to the Galwan Valley in the eastern Ladakh region.

The countries share a border from Arunachal Pradesh in the northeast to Sikkim in the centre and Ladakh, a northern federally administered territory, which are mainly land borders. But in Pangong Tso in eastern Ladakh, it passes through a lake. India controls the western portion of the 45-km lake, while the rest is under Chinese control.

000000
Popular comments
India based its claim on a map created by a British Surveyor at the time of India being a Colony of the British and China under the upheaval of the heroin war. Someone should come with a map of this area. India breaks the smooth pattern of the border by introducing miles of land out of this smooth line.