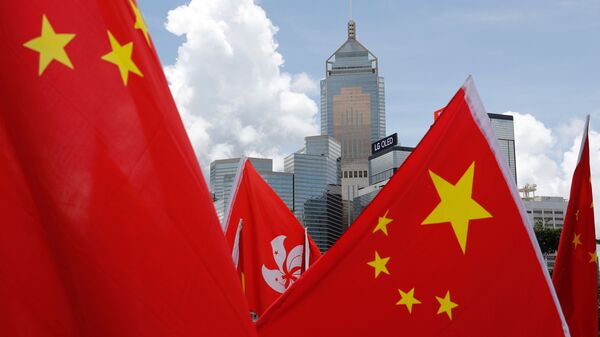 Demond Cureton
All materialsWrite to the author
The announcement follows statements from Hong Kong's chief executive, who accused opponents of China's national security law of being "the enemy of the people" following pro-secessionist violence.

Mr Zheng Yanxiong has been appointed National Security Advisor, chief executive Carrie Lam announced on Friday ahead of the launch of a new national security committee.

Mr Zheng will oversee the implementation the new agency set to enforce a national security law set to enter force in August.

Further appointments include Luo Huining, director of the Beijing liaison office in Hong Kong, who will be the agency's top advisor to the Committee for Safeguarding National Security. Edwina Lau (Lau Chi-wai) will also head the dedicated police unit tasked with enforcing the new bill along with six court magistrates, a government statement read.

The news comes after the Hong Kong government said in a statement that people joining "illegal and violent activities" on Thursday used pro-secessionist slogans aimed at "subverting the State power".

"The HKSAR Government strongly condemns any acts which challenge the sovereignty, unification and territorial integrity of the People's Republic of China. The Law of the People's Republic of China on Safeguarding National Security in the Hong Kong Special Administrative Region prohibits secession, subversion of state power and other acts and activities which endanger national security. The HKSAR Government calls upon members of the public not to defy the law," a government spokesperson said on Thursday.

Mrs Lam welcomed the State Council's appointment, adding that the Hong Kong authorities would work closely to "perform their respective functions and do their utmost" in implementing the National Security law, she said in a statement.

Mr Zheng and the 2011 Wukan Village Protests, Comments From Officials

Mr Zheng is the secretary-general to the Communist Party's Guangdong branch and is known for a crackdown on protests in the Wukan village in 2011.

The official said that villagers were "colluding with foreign media to create trouble" and that "pigs will fly before the foreign press can be trusted," it was revealed through a leaked video at the time of the protests.

“They have to be strong characters to executive the central government’s public and national security. They are experienced officials and capable of taking up these roles,” he said.

“His comments about the foreign press show a ‘bamboo curtain’ mentality, as if mainland China does not need to interact with the outside world,” she said in a statement.

The news comes after Mrs Lam slammed opponents of China's national security law in late June, stating they should stop "smearing" efforts to pass the bill, adding those blocking efforts were "the enemy of the people".

The announcements come after US lawmakers passed a bill on Tuesday sanctioning banks doing business with Chinese government officials involved in the national security bill, namely after US secretary of state Mike Pompeo said in May that Hong Kong could lose "political autonomy", triggering the measures.

On 30 June, the standing committee of China's legislature voted unanimously in favor of the national security bill, sparking a firestorm of negative comments from the Hong Kong opposition as well as several Western officials, who claim it would undermine the city's autonomy guaranteed during its transition from the United Kingdom to China. Later that day, Chinese President Xi Jinping signed the bill into law.

Some Hong Kong residents have said the security legislation, which bans secessionist activities, is undermining their freedoms.

However, both Hong Kong's leadership and the central government in Beijing say the bill would not affect residents’ rights. Beijing maintains that the unrest in Hong Kong is a result of foreign interference and vows to respect the one country - two systems principle.