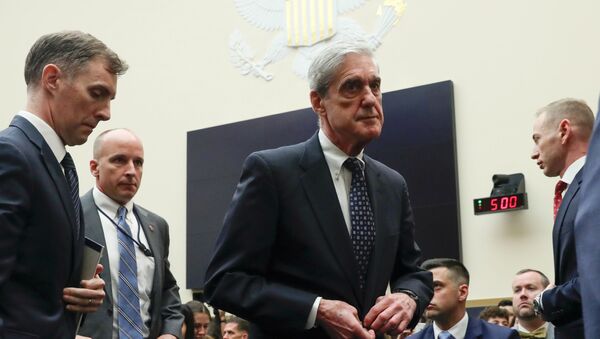 Tim Korso
All materials
Democrats still cherish hopes that the full report contains evidence that Trump either obstructed justice or conspired with Russia to rig the 2016 elections, something that US Special Prosecutor Robert Mueller himself ruled out in March 2019.

The US Supreme Court has accepted a petition filed by the Department of Justice (DoJ) aimed at preventing the Democrat-led House Judiciary Committee from accessing and publishing the full Mueller report, including grand jury materials from the notorious two-year probe, which many Democrats hoped would be Trump's undoing.

The request was filed after a lower court agreed to hand over the classified part of the report to House Democrats, with the DoJ arguing that the revelation of the grand jury materials would constitute an unwarranted breach of grand jury secrecy. The process was stalled by the Trump administration, which asked justices to halt the implementation of the ruling in order to prepare for an appeal.

"In light of the national prominence of this grand-jury investigation, the separation-of-powers concerns raised by the decision below, and the potential damage that decision could inflict on 'the proper functioning of our grand jury system,' this Court’s review is warranted", the DoJ wrote in its petition to the Supreme Court.

The Supreme Court decision could thwart the plan to make the materials public ahead of the 2020 presidential election in November, as justices would only begin to review it in the next term, which kicks off in October. Democrat Jerrold Nadler, chairman of the Judiciary Committee, which made the original request to disclose the report, expressed frustration over the delay, suggesting that the materials could help to prevent Trump from being reelected.

"Unfortunately, President Trump and Attorney General Barr are continuing to try to run out the clock on any and all accountability. […] While I am confident their legal arguments will fail, it is now all the more important for the American people to hold the president accountable at the ballot box in November", Nadler said.

Ever since Mueller dispelled Dem hopes of removing Trump for obstruction of justice or proving that there was a campaign of collusion with Russia in March 2019, POTUS' political opponents have sought ways of obtaining an unredacted version of the Mueller report, believing that it could contain evidence to accuse Trump of misconduct. Democrats have since successfully impeached Trump on an unrelated incident, but failed to remove him from office.

In his final report and testimony to US Congress, Mueller stated that he found no evidence confirming the allegation that Trump's campaign colluded with Russia to win the 2016 election. He further said that while he could accuse POTUS of obstructing justice, he could not exonerate him of those accusations, either.