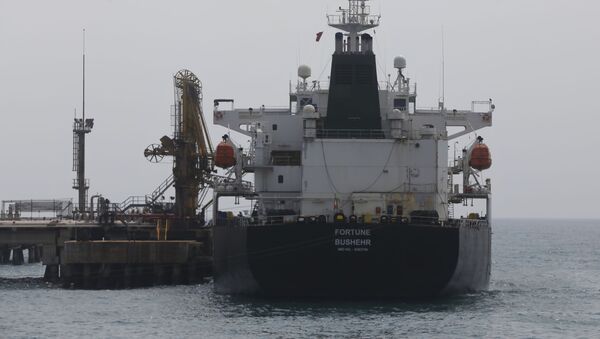 Tim Korso
All materials
Iran has recently been helping Venezuela, another nation hit by US sanctions, by supplying it with fuel after the country's own refineries lost most of their capacity to work with the ultra-heavy blend of crude extracted from Venezuela’s oilfields, leading to petrol shortages.

The US has made another attempt to stop the oil trade between Venezuela and Iran as federal prosecutors have filed a new suit seeking to seize gasoline that Tehran has purportedly sent to Caracas in four tankers, The Wall Street Journal reported. According to the newspaper, Washington is looking to both stop the delivery of gasoline to Venezuela as well as the payments for the shipped resources, which will allegedly be used to fund the Islamic Revolutionary Guard Corps (IRGC) – a branch of the Iranian Armed Forces that the US has designated as a "terrorist organisation".

"[These payments] support the IRGC’s full range of nefarious activities, including the proliferation of weapons of mass destruction and their means of delivery, support for terrorism, and a variety of human rights abuses, at home and abroad", US Attorney for the District of Columbia Zia Faruqui claims in the filing.

The US prosecutors claim that an Iranian businessman, Mahmoud Madanipour, is affiliated with the IRGC and has been using his firms based in the United Arab Emirates to organise the sale of Iranian crude while evading the unilateral American sanctions, according to the newspaper. Madanipour purportedly falsified the oil's origin in papers and used mid-sea, ship-to-ship transfers to fool authorities and has allegedly been working on expanding his operations beyond Venezuela, finding buyers in China and Malaysia too.

The prosecutors claim to have obtained the businessman's communications in which he discussed ways of transferring the money without triggering the US sanctions, with potential buyers suggesting an array of countries where it could allegedly be done - Oman, UAE, Turkey, Italy, and Germany, the WSJ says.

The legal move by the federal prosecutors reportedly comes as Iran has allegedly sent nine more ships with fuel to sanctions-hit Venezuela. Washington has boasted of pressuring four vessels into abandoning their order to deliver the fuel with threats of sanctions, while the fate of the rest of the flotilla remains unknown.

Back in May 2020, Iran sent five tankers carrying fuel and components for refining oil into gasoline to Venezuela despite the possibility that they could have been intercepted by the US Navy on their way. They successfully docked in the Latin American state on 1 June, easing the country's fuel crisis, which was caused by local refineries being unable to process locally extracted oil into gasoline.

Venezuelan oil is extremely heavy and requires sophisticated equipment and components to refine it. However, with the introduction of the US sanctions, the country can no longer order such equipment from abroad, with the already existing capacity gradually degrading. The unilateral American sanctions also exacerbated the pre-existing economic crisis in the country as Caracas lost its ability to freely sell oil on the global market and lost access to many of its assets stored in Western banks.