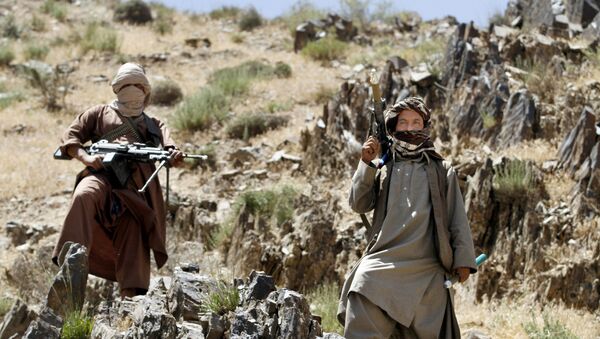 Oleg Burunov
All materialsWrite to the author
On Tuesday, Pentagon spokesman Jonathan Hoffman said that the US Department of Defence has no evidence to back up allegations about collusion between Russia and the Taliban.

Russian Foreign Ministry spokesman Zamir Kabulov has stated that there is no proof concerning claims about Moscow’s “collusion” with the Taliban, and that there are only groundless accusations against Russia on the matter.

“We need evidence, but there is no such proof. These are unfounded allegations", Kabulov underscored.

Referring to US media’s recent reports about drug smuggler Rahmatullah Azizi allegedly acting as a mediator between Russia and the Taliban, Kabulov said that he had “never heard of him”.

He added that there are a lot of questions related to these reports and that "fakes also need to be thoroughly prepared”.

In a recent article, The New York Times named “businessman" Azizi as a middleman "between the [Russian] GRU and militants linked to the Taliban who carried out the attacks" against US servicemen in Afghanistan.

Kabulov's statement comes after US Speaker of the House Nancy Pelosi said on Wednesday that Washington must “right away” impose sanctions against Russia over Moscow's alleged “collusion” with the Taliban.

Responding to the possibility of new sanctions over the unconfirmed claims, Russian presidential spokesman Dmitry Peskov stressed that events happening in the US are "difficult to understand" and "hard to explain".

This followed Pentagon spokesman Jonathan Hoffman saying on Tuesday that “the [US] Department of Defence has no corroborating evidence to validate the recent [collusion] allegations found in open-source reports”.

The remarks came after The New York Times cited unnamed government sources as saying that US President Donald Trump had been presented with an intelligence report claiming that Moscow could have paid bounties to armed Islamic insurgents in Afghanistan to assassinate American soldiers.

POTUS, for his part, rejected the claims that he was informed about the unverified intelligence on the matter, insisting that "it didn't rise to that level" and suggesting that the "secret source" cited by The New York Times "probably does not even exist".

The allegations were also earlier denied both by Moscow and the Taliban, with the Kremlin slamming the reports as "nonsense" and the militant group noting that its actions are not related to foreign intelligence agencies or governments.