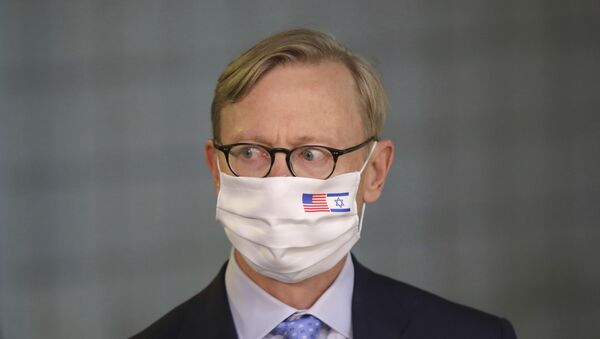 The demand for an extension to the embargo has not garnered support in the UN Security Council, so the US wants to trigger the snapback mechanism outlined in the 2018 nuclear deal – despite no longer being a member of the agreement.

The United States is ready to use military force against Iran if that’s what it takes to prevent the Islamic Republic from acquiring nuclear weapons, the US special envoy for Iran Brian Hook has said.

“We’ve made very clear, the President has, that Iran will never acquire a nuclear weapon, and the military option is always on the table,” Hook told Israel’s Channel 13 News.

1 \ President Trump's envoy for Iran Brian Hook tells me in an exclusive interview in Jerusalem that the military option against the Iranian nuclear program is still on the table pic.twitter.com/pdSBBwH0Pn

​“I think the Israeli people and the American people and the international community should know that President Trump will never allow them to have a nuclear weapon.”

Hook is on a Middle East charm offensive to gain support for an extension to the United Nations’ ban on arms transfers to and from Iran, which is set to expire this October. The US wants to prolong the 13-year-long embargo indefinitely, claiming that Iran repeatedly violates it – something the country denies.

The US is trying to push its demand through the UN Security Council, but appears to have quite a weak standing there as the idea was opposed by many in the 15-member body, including veto powers Russia and China.

Should the Security Council push fall flat, the US wants to invoke the so-called snapback mechanism under the 2015 Iran nuclear deal (JCPOA) to re-instate UN sanctions.

Although Donald Trump quit the landmark agreement in May 2018, Washington argues that it has a legal basis to refer to Iran’s non-compliance with the deal. The Security Council’s Resolution 2231, which endorsed the JCPOA, was never amended to reflect that the United Sates is no longer a participant in the agreement.

Tehran has effectively ended its nuclear commitments in response to renewed US sanctions, but signalled that it would return to compliance if the crippling sanctions get lifted.

Britain, France and Germany, the European signatories of the deal, have opposed the US efforts to unilaterally trigger the snapback mechanism, warning that it would be “incompatible” with their efforts to preserve the JCPOA.

Iranian Foreign Minister Zarif threatened in January to withdraw entirely from the nuclear Non-Proliferation Treaty if the UN extends the embargo.