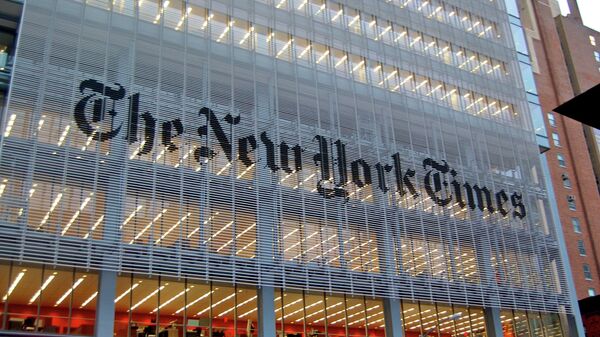 Ilya Tsukanov
All materialsWrite to the author
Democrats have asked Congress to consider new sanctions against Moscow over media claims that Russia has been paying Taliban-affiliated militants to kill American and other coalition troops serving in Afghanistan. Russian officials have vocally denied the allegations, and accused those pushing them of trying to further undermine Russia-US ties.

US President Donald Trump resumed his attack on what he termed "the discredited @nytimes" on Wednesday morning over last week's story about alleged Russian efforts to put contracts out on US and NATO servicemen in Afghanistan.

"The secret source probably does not even exist, just like the story itself. If the discredited @nytimes has a source, reveal it. Just another HOAX!" Trump exclaimed, referring to the 'unnamed sources' which the New York Times used as the basis of the bounties story.

In a second tweet, Trump pointed to the recent Pentagon assessment on the bounties story which said that there was "no corroborating evidence to back reports," and asked if Americans still didn't "understand that this is all a made up Fake News Media Hoax started to slander me and the Republican Party."

Trump reiterated that he had been not been briefed on whatever information agencies may have had because it "did not rise to that level."

The president's comments followed fresh claims by the newspaper Tuesday citing 'three officials familiar with the matter' on alleged new data showing financial transfers from Russia's GRU military intelligence service to a Taliban-linked bank account. Before that, the Associated Press issued a report, also citing unnamed officials 'said to have direct knowledge of intelligence', alleging that Trump had known about the bounty reports since at least 2019, and not since early 2020, as reported by the NYT.

Senior GOP lawmakers expressed skepticism over the claims, with Iowa Republican Senator Joni Ernst telling reporters Tuesday that the reports were "absolutely inaccurate" after receiving a briefing on the matter by intelligence agencies. Ernst also accused Democrats of exaggerating and "politicizing" the story, suggesting "they had access to the same sort of information months ago."

Senior Democratic lawmakers have called for new sanctions against Moscow, and have accused Trump of "kissing up to Putin" at the expense of US national security. Democratic House Intelligence Committee chairman Adam Schiff said new sanctions were necessary "to further deter Russia's malign activities," while Senate Democratic leaders asked Secretary of State Mike Pompeo and Pentagon Chief Mark Esper to testify before the Senate later this week.

Russian officials have vocally denied the allegations made in the NYT's story, with the Russian Foreign Ministry calling the report's claims "nonsense" and suggesting that some elements of the US intelligence community may be seeking to sabotage Trump's efforts to make peace with the Taliban and withdraw US troops from Afghanistan, which it claims would deprive the CIA and other US agencies of billions of dollars in illicit earnings from drug trafficking and other illegal activities.

On Tuesday, Russian Ambassador the United States Anatoly Antonov said the NYT had "indiscriminately accused" Russia of serious crimes without any evidence, and added that the newspaper never reached out to the Embassy for comment. Antonov also speculated that the bounty claims may have been concocted by "those who oppose the development of a normal, mutually respectful dialogue between Russia and the United States." The diplomat complained that Embassy staff have received threats since the story was published.