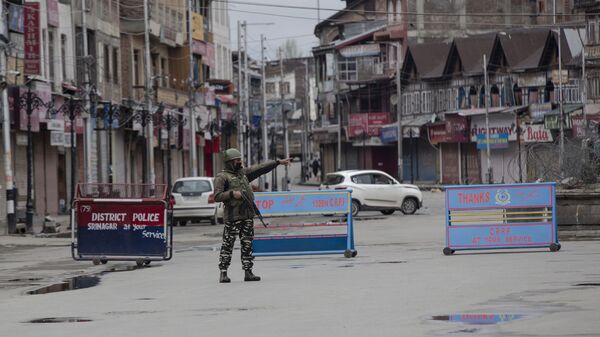 © AP Photo / Dar Yasin
Subscribe
International
India
Africa
New Delhi (Sputnik): Last week, security forces in Jammu and Kashmir were placed on high alert after over 200 youths from the valley with Pakistani visas were reported missing. Jammu and Kashmir's Director General of Police Dilbag Singh has accused Pakistan of sending in trained terrorists through various areas of the valley.

At least one soldier and a civilian were killed and three other security personnel were injured after a group of terrorists attacked a convoy in the Sopore area of Kashmir on Wednesday morning.

According to a senior paramilitary forces official, the terrorists had attacked a road opening party held by the Central Reserve Police Force while they were placing a checkpoint along with Jammu and Kashmir police personnel on the Sopore Bypass highway.

"We lost one Central Reserve Police Force (CRPF) personnel and a civilian. Three other CRPF personnel have been shifted to hospital for treatment. They are said to be in critical condition,” Director General of Police Dilbag Singh said.

The area has been sealed off and a search operation was launched soon after the attack, he added. Indian Army officials and police have also reached the spot.

"Our officials have rescued a three year old boy, whose lost his father (the civilian) in the attack. They had come out to fetch milk in the morning, when the attack took place," Singh added.

In another incident, one terrorist was killed in a failed infiltration bid in Keri Area along the Line of Control early in the morning. Sources said a group of terrorists was spotted 400 metres inside the Indian side of the Line of Control. "The group was fired upon, and one was killed. An AK-47 with two magazines was recovered," army sources said.

India and Pakistan have been accusing each other of sponsoring terrorism - and both have denied these allegations. On Tuesday, Pakistan Prime Minister Imran Khan accused India of being behind the Monday Karachi Stock Market attack, in which three people were killed. However, India categorically rejected the allegation and rejected the statement as "absurd".