‘So Far, So V’: Bank of England Predicts Quick Economic Bounce Back, With ‘Considerable’ Risks 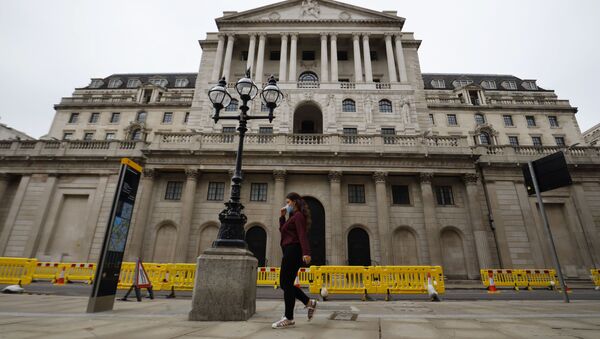 © AFP 2021 / Tolga Akmen
Subscribe
The UK’s central bank has recently improved its assessment of the cumulative GDP loss in 2020 from 17 percent to 8 percent, as the easing of lockdown restrictions have driven up demand and economic activity.

The Bank of England’s chief economist Andy Haldane has said that Britain is on track for a V-shaped economic recovery after a faster-than-expected rebound from the coronavirus slump.

The UK economy was already two months into the recovery amid pent-up demand and consumer spending, Haldane said in a Bank webinar on Tuesday.

“It is early, but my reading of the evidence is so far, so V,” he said of the rapid pace of the recovery.

Official figures reveal that the UK economy contracted by 2.2 percent in the first quarter of this year, more than first thought and more than it ever lost since 1979. The GDP also shrank by a record 20.4 percent in April, its biggest monthly fall on record, but Haldane said this data was already “ancient history”.

However, the Bank of England now expects Britain to lose 8 percent of the annual gross domestic product this year, not as extreme as the 17 percent suggested in May.

“The recovery in both the UK and global economies has come somewhat sooner, and has been materially faster, than in the MPC’s May Monetary Policy Report scenario – indeed, sooner and faster than any other mainstream macroeconomic forecaster,” Haldane said in the speech.

Despite his generally optimistic tone, the economist added that there was a risk of a “vicious cycle” if unemployment turns out to be greater than expected.

“Risks to the economy remain considerable and two-sided,” he cautioned. “Although these risks are in my view slightly more evenly balanced than in May, they remain skewed to the downside.”

Haldane said that the most important risk now is a repeat of the high and enduring unemployment rates of the 1980s, especially among youths.

Prime Minister Boris Johnson has announced a mass spending programme to create new jobs, which is supposed to be an echo of Franklin Roosevelt’s ‘New Deal’.

The programme aims to invest $6.2 billion (0.2 percent of Britain’s 2019 GDP) in new infrastructure projects – schools, roads, rail and more – and fast-track the money to accelerate the projects.

The Bank last month added another £100 billion ($123bn) to its quantitative easing in a bid to shore up the economy, taking the total value of its asset-purchasing programme to £745 billion ($921bn).

000000
Popular comments
They probably mean the bounce that happens when the economy hits the bottom and can't get any lower. Thomas Cook, Trafford Centre and other businesses left billions of pounds of debt behind. Companies should be hiring by now but they are not. The BoE printed £100bn last month but most of the money stays in the banks and will never reach the necessary investments.