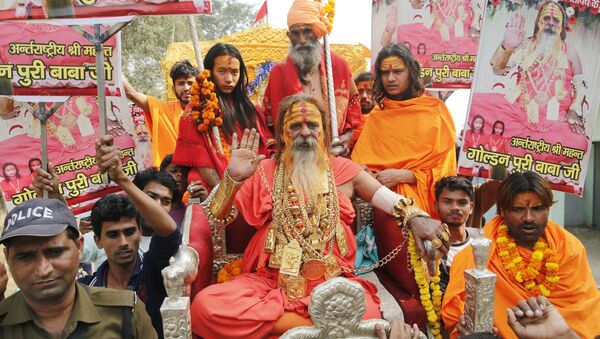 © AP Photo / Rajesh Kumar Singh
Subscribe
International
India
Africa
New Delhi (Sputnik): The baba, despite having many criminal cases against him, earned wide media attention for undertaking the annual Kanwar Yatra pilgrimage along with his entourage, including several bodyguards and luxury cars.

Sudhir Kumar Makkar, alias 'Golden Baba' died following a prolonged treatment at Delhi's premier hospital All India Institute Medical Sciences on Tuesday night, it was revealed on Wednesday. He was in his early 60s.

Baba had a massive fan following, and was known as 'Golden Baba' for always being adorned in gold ornaments, weighing several kilos and worth millions of rupees.

He was hospitalised for some "serious illness" treatment in mid-May.

The ‘Golden Baba’ started wearing gold in 1972, when it was less expensive. Initially, he wore around 40 grams of gold which gradually increased. He was last seen wearing 14 kilos of gold during the annual Kanwar Yatra pilgrimage in 2019 and wore 20 kilos of gold jewellery the previous year.

Apart from his love for gold, the 'Golden Baba' owned over a dozen luxury cars.

Before becoming a monk, he ran several garment shops and was in the property business. But he also had a criminal history, and had been charged at various times with extortion, assault and kidnapping. It remains unclear how many charges were pending against the Golden Baba at the time of his death.