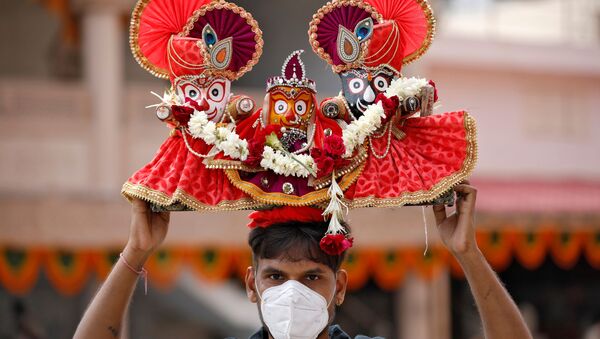 New Delhi (Sputnik): India is a land of diversity, where religious and cultural demography is different in every state. Celebrations which manifest in the form of grand festivities are the hallmark the nation's identity and its association with traditions. However, most of these events took a sombre tone due to the pandemic this year.

Millions of people from different communities come together to celebrate various festivals in India, strengthening the bond of brotherhood. But with social distancing norms in place during the pandemic, most of these iconic gatherings have been cancelled this year.

The pandemic has dampened the grand Hindu festival of Ganesh Chaturthi, which is identified with the glamorous city of Mumbai. The festival marking the birth of the Hindu God Ganesh, which had been scheduled for 22 August, will not be celebrated this year.

The iconic 'Lalbaughcharaja' Mandal (devotee organisation) has refused to install the most popular Ganesh idol this time and have planned to hold a 10-day plasma and blood donation camp instead.

The temple has also decided to extend financial help to the families of policemen who lost their lives to COVID-19. Millions participate in the festival each year, including film stars who live in Mumbai. However, this is the first time in 85 years that the event will not take place.

The air reverberates with Chanting of slokas, pulsating rhythm of Dhol-Tasha & #GanpatiBappaMorya as lakhs of devotees throng into Lalbaugcha Raja & thousand other Puja Mandaps in the State pic.twitter.com/FovotIRLkx

Scores of devotees of Lord Shiva step out for a long and tenacious journey on foot during the peak of summer in India in June and July. However, the Uttarakhand government called off the pilgrimage this year due to the pandemic.

Wearing orange clothes, a colour that signifies penance in Hinduism, devotees undertake a barefoot journey to holy city of Haridwar in Uttarakahnd, the land of the holy Ganges River. They carry decorated pots on their shoulders to fetch the holy water from the river.

Southern Indian state's Sabarimala temple, dedicated to Lord 'Ayappa', made headlines after India's Supreme Court ordered it to allow the entry of women of all ages into the sanctum sanctorum of the temple. The order dispelled a myth that women are impure during menstruation.

However, the joyous occasion of the Sabarimala festival, scheduled for 29 March, could not be celebrated this time as the state government has deferred the 10-day festival to due to the pandemic.

The temple, which usually attract millions of devotees from south India at this time of year, remained deserted and reduced to mere rituals this year.

The Ram Navmi festival celebrated in Ayodhya, a city in the northern Indian state of Uttar Pradesh, marks the birth of the Hindu God Ram. An annual nine-day fair is held attracting millions from India and abroad to celebrate the occasion.

However, the chief Yogi Adityanth-led government, under pressure from various authorities, called off the celebration this year. The festival was supposed to start from 25 March.

The decision came at the time when the top court allowed the construction of Ram temple in the disputed land after nearly a decade-old legal battle between Hindus and Muslims to occupy the land.