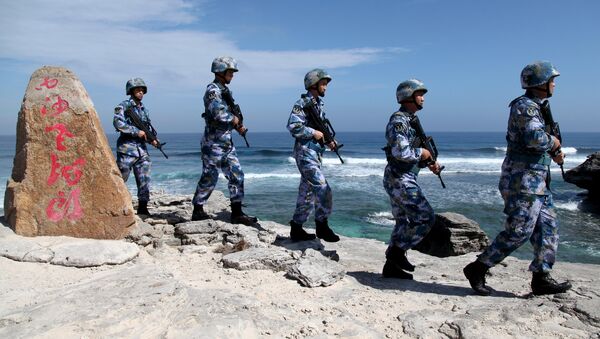 © REUTERS / Stringer
Subscribe
While the US may be gearing up for a military confrontation with China, some Taiwanese strategists are worried Washington may not be willing to make it happen over a cross-strait invasion.

As tensions simmer between the People’s Republic of China and Taiwan, which Beijing regards as a rebellious province, one prominent defense analyst and former official is afraid the United States won’t honor its informal commitments to guarding Taiwanese autonomy.

‘The Situation is a lot Grimmer’

“Given the military imbalance between Taiwan and the mainland, the absence of cross-strait dialogue and no [efficient communication] mechanism in place between the US and the mainland, I am worried about the situation because anything could happen,” Su Chi, president of the Taipei Forum think tank and former secretary general of Taiwan’s National Security Council, told the South China Morning Post on Tuesday.

Su fretted to that outlet that a potential People’s Liberation Army (PLA) offensive could be over so quickly, it may be little more than “wishful thinking” to hope the US would shoulder the cost of intervention by that point.

“The situation today is a lot grimmer than the time when Chen Shui Bian and Ma Ying Jeou were presidents” Su said of the two administration before current Taiwanese President Tsai Ing Wen’s, covering the period between 2000 and 2016.

The US formally abrogated its defense treaty with Taiwan in 1979, when it switched recognition of the legitimate Chinese government from Taipei to Beijing, and the 1979 Taiwan Relations Act that laid down the framework for the continued US-Taiwan relationship made no legal requirement of defending Taiwanese sovereignty.

Since then, while US presidents have vowed to defend Taiwan, they have also maintained the policy of One China, precluding any possible recognition of a prospective Taiwanese declaration of independence.

That trend, however, has changed with the 2016 elections of Tsai and US President Donald Trump. Tsai has shown a clear proclivity for independence from Beijing, and one of Trump’s first international incidents, which occurred in December 2016, before he’d even taken office, was his answering a congratulatory phone call from Tsai and having a 10-minute conversation with her.

However, analysts in Washington are no less worried about Trump’s potential wavering on Taiwan.

“There is a tremendous amount of ambivalence in Taiwan and worry,” Daniel Russel, former US assistant secretary of state for East Asian and Pacific affairs and former senior director for Asian affairs at the National Security Council, told Politico last month. “And there’s reason to worry that Trump will lose interest in Taiwan. He’d trade away Taiwan in a heartbeat if he thought it would get him his trade deal with China.”

Patrolling for China’s new advanced submarines was floated as a possible explanation for the slew of US Navy aircraft patrols zigzagging across the South China Sea over the last two weeks.

Sputnik reported on Friday that four US surveillance aircraft had been spotted patrolling the strategic waterway the day prior, and on Monday, Peking University’s South China Sea Probing Initiative (SCSPI) reported six US patrol and surveillance aircraft in the region, some of which flew what SCSPI described as “a tortuous flight path.”

​An anonymous “Taiwanese security source” told the South China Morning Post on Friday the patrols indicate the US “must have intelligence about PLA Navy [PLAN] submarine movements in the region. With the involvement of a number of different kinds of warplanes, it also shows that the USAF [US Air Force] is testing the readiness and reliability of its joint missions in this region,” they said.

Another official, Su Tzu Yun, a research fellow at the Institute for National Defence and Security Research, reached a similar conclusion.

In late April, the PLAN commissioned two more Type 094A nuclear-powered ballistic missile submarines, also called the Jin-class. The “boomer” subs can carry up to 16 JL-2 nuclear-tipped ballistic missiles, which have a range of 4,350 miles.

In 16 separate incidents this year, PLA aircraft have entered the air defense identification zone (ADIZ) around Taiwan, a region outside the island’s borders where aircraft can be seen on land-based radars. Taiwan’s air force typically scrambles fighters to intercept and warn them off.

On Sunday, two PLA Air Force H-6 bombers approached Taiwan from the east after traversing the Miyako Strait, an international waterway to the north of the island, China’s Global Times reported. The outlet noted that military experts believed the drill showed China’s ability to strike Taiwan from any side.

The PLAN has also massively expanded its amphibious fleet in recent years, which Pentagon analysts believe can only be aimed at Taiwan. In April, the PLAN’s second Type 075 amphibious assault ship was launched, a type of aircraft carrier that can deploy thousands of marines and their equipment as well. Sputnik has reported on the massive PLAN initiative to build three such vessels to complement its seven Type 071 landing platform docks and more than 60 smaller landing craft.

Earlier this week, the US Navy announced it was performing drills east of Taiwan, in the Philippine Sea, involving two aircraft carriers and their battle groups. Similar drills occurred last week as well.