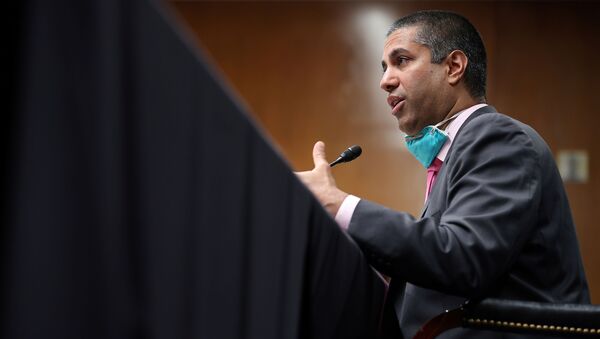 © REUTERS / Chip Somodevilla/Pool
Subscribe
New Delhi (Sputnik): Delayed by the pandemic, India’s 5G trials and spectrum auctions have been pushed forward by a year reportedly. At a time when India and China are struggling with border tensions, the US is exploring tech avenues to work in collaboration with India – a major one of which is high speed internet connectivity.

Ajit Pai, the ethnically Indian Chairman of the US Federal Communications Commission (FCC), on Tuesday said America is rather keen on teaming up with India on the 6GHz spectrum band, which would further fuel smoother wireless services.

He said it during a India Business Council webinar.

What is 6 GigaHertz (GHz) Spectrum and How Will it Help?

The 6 GHz band will deliver faster connectivity speeds and improved capacity when compared to both 2.4 GHz and 5 GHz Wi-Fi, making it ideal for smartphones, tablets, laptops and even Augmented Reality (AR) and Virtual Reality (VR) devices.

The spectrum, which is being touted as the next big spectrum addition since the FCC sanctioned internet bands for WiFi services back in 1989, is capable of multiplying the amount of bandwidth space on routers and dongles by four times – which will facilitate smooth internet functioning.

“Wi-Fi 6 – which has already started being rolled out – will be over two-and-a-half times faster than the current standard, and it will offer better performance for connected devices. During my visit to India in February, I had a good discussion with Indian officials about our 6 GHz efforts. So, I know that India is interested in exploring the possibilities of unlicensed use in this band,” media reports quoted Pai as saying.

The FCC chairman also added that Indo-US collaboration on developing communication technologies would be another step towards unlocking the even mightier potential of upcoming 5G services.

Earlier this month, Pai also urged Indian telecom stakeholders to be active in speaking to regulatory officials and policymakers about the importance of pushing ahead with next generation 5G networks.

During his trip to India earlier in February, US President Donald Trump had advised the country to choose equipment needed to build 5G infrastructure from the "West".

While India is taking drastic decisions on the involvement of Chinese players in the development of the country’s tech infrastructure, Cellular Operations Association of India (COAI) – the country’s apex telecom representation body, last Friday signed a Memorandum of Understanding (MoU) with 5G-ACIA in a bid to shape and execute 5G-enabled mobile communications in different vertical industries.

The 5G-Alliance for Connected Industries and Automation (ACIA) is a working party of German electrical and electronic manufacturers – ZVEI.

ITI is a Central Government-owned telecommunications equipment manufacturer and Tech Mahindra is an Indian company that operates across 90 countries and is estimated to be worth $5.2 billion.