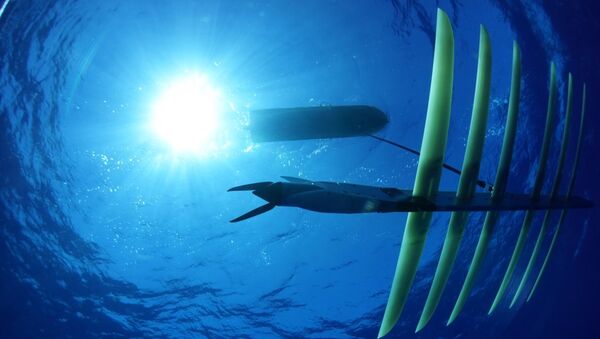 While the craft was originally used for scientific research, it seems that its low profile and significant endurance led the military to consider employing it for a different purpose.

It appears that a peculiar video that recently emerged on Facebook and shows some sort of aquatic vehicle off Key West in Florida might've captured an element of a certain US Navy program, Forbes reports.

The video in question shows a small craft floating in the water, with the person filming it noting the transponders and antenna the vehicle has, and openly stating that he has "no idea what it is".

According to the magazine, the vehicle is "almost certainly" an autonomous unmanned craft called Wave Glider made by Liquid Robotics, a US company owned by Boeing, while the antennas it is sporting suggest it belongs to the Sensor Hosting Autonomous Remote Craft (SHARC) program.

While Wave Gliders have been used for scientific research, their "long endurance" coupled with their low radar and visual signature have apparently made them well suited for military operations such as intelligence gathering and submarine hunting.

SHARC's role is to "provide the fleet with a low cost, asymmetric advantage in support of multiple classified missions”, the magazine notes, adding that the craft "may be gathering signals intelligence, eavesdropping on communications and detecting radar emissions".