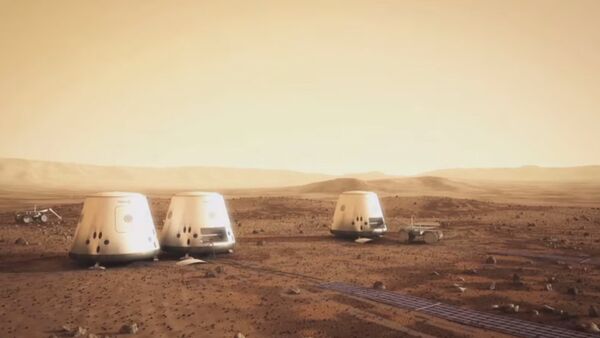 © YOUTUBE/MarsOneProject (Screenshot)
Subscribe
A new study by a French scientist claims to have figured out the minimum number of settlers necessary for a colony on the red planet to be able to survive between supply deliveries.

Jean-Marc Salotti, a professor at Bordeaux Institut National Polytechnique, crunched the numbers for a paper published in Scientific Reports earlier this month.

"I show here that a mathematical model can be used to determine the minimum number of settlers and the way of life for survival on another planet, using Mars as the example,” Salotti writes in the paper.

"For the sake of simplicity, it is assumed here that the initial amount of resources and tools sent from Earth will be rather limited, and as a consequence, will not have much impact on survival,” Salotti says. With Mars being a 150-300-day journey from Earth, the ability to make maximum use of local resources will be paramount, and the scientist notes this is just one of many possible variables that could totally ruin a manned mission to Mars.

However, Salotti notes that many facilities will be social, and since efficiency scales upward, things will become much easier the more people you have.

"If each settler was completely isolated and no sharing was possible, each individual would have to perform all activities and the total time requirement would be obtained by a multiplication by the number of individuals,” Salotti notes. For example, 10 separate settlers would need 10 separate houses, but together, they would only require one structure, and a proportionally smaller number of people would be needed to feed everyone or harvest other resources.

“A greater number of individuals makes it possible to be more efficient through specialization and to implement other industries, allowing the use of more efficient tools,” Salotti writes.

While a number of nations have entered the new race for manned moon missions, Mars remains the real prize, and only the European Space Agency (ESA) and the US have outlined plans for such an undertaking. The US space agency NASA hopes to send a mission by the early 2030s, but the ESA has yet to propose a spacecraft.

During a recent webinar, Kennda Lynch, an astrobiologist and geomicrobiologist at the Lunar and Planetary Institute in Houston, Texas, noted that any humans hoping to spend extended lengths of time on Mars, including moving there for good, may require significant amounts of genetic engineering to be able to survive the starkly different conditions, such as high radiation and low gravity.