Netanyahu Warns Assad Not to Ally With Iran’s Ayatollahs, Hints Israeli Ops in Syria Will Continue 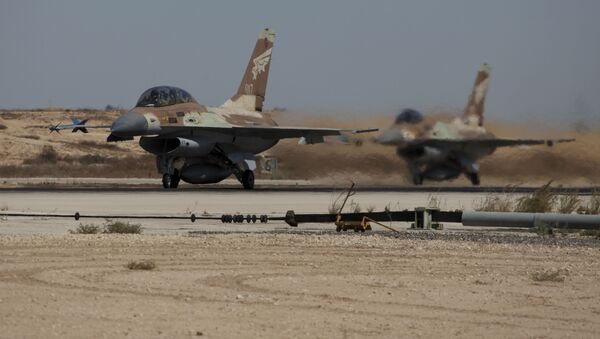 © AP Photo / Dan Balilty
Subscribe
The Israeli Air Force has carried out hundreds of strikes in Syria in recent years, justifying air and missile attacks by accusing Iran of trying to establish a proxy presence in the Arab Republic. Damascus has denied these claims, and accused Tel Aviv of blatant aggression.

Israel will continue its military operations against Iran in Syria to prevent its entrenchment in that country, Prime Minister Benjamin Netanyahu has announced.

“We are absolutely resolved to prevent Iran from entrenching itself militarily in our immediate vicinity,” Netanyahu said, speaking to reporters at the start of a meeting with US Special Representative for Iran Brian Hook on Tuesday.

“I say this to the ayatollahs in Tehran: Israel will continue to take the actions necessary to prevent you from creating another terror and military front against Israel. And I say to Bashar al-Assad: You’re risking the future of your country and your regime,” Netanyahu added.

The Israeli prime minister also approved the ramping up of sanctions against Iran to stop its alleged nuclear weapons ambitions. “I believe it’s time to implement snapback sanctions. I don’t think we can afford to wait. We should not wait for Iran to start its breakout to a nuclear weapon, because then it will be too late for sanctions,” he suggested. 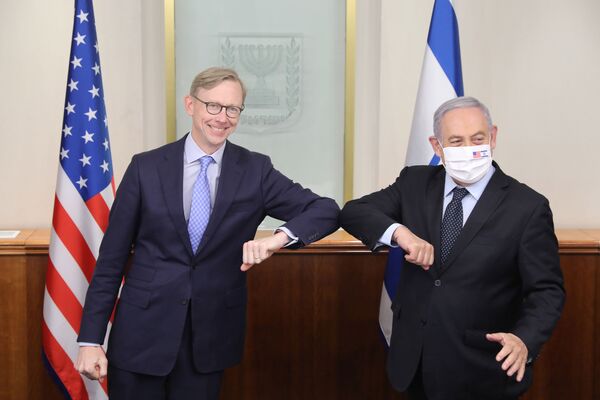 Hook, for his part, said Israel and the United States “see eye to eye” on trying to extend the UN arms embargo against Iran past its October expiry date, and warned that a failure to do so would allow Iran to “freely import fighter jets, attack helicopters, warships, submarines” and other weapons, and then re-export them to Hezbollah, Hamas, Iraqi militias, and the Houthi militia in Yemen, among other groups.

Netanyahu also accused the international community of ‘colluding’ with Iran amid its attempts to “develop nuclear weapons” and wage “rampant aggression across the Middle East and beyond” through the arming, training, financing and dispatching of “terrorists.”

Syrian Air Defences Reportedly Intercept Israeli Attack on Airspace Near Town of Sweida
Israel’s military leaders have previously admitted to carrying out ‘hundreds’ of air strikes against Syria over the past several years, but normally refrain from commenting on day-to-day operations. Syria has reported an uptick in Israeli aggression; its neighbour has carried out at least three major attacks this month in Hama and As-Suwayda.

Tel Aviv has accused Iran of attempting to build up its military presence in Syria, as well as neighbouring Lebanon and the Palestinian territories. Damascus has denied accusations of an Iranian buildup, saying Tehran’s presence is limited to advisors and arms assistance aimed at helping the country battle with jihadist extremists, and adding that it is Syria’s sovereign right to station whatever foreign forces it wants to on its territory.

In recent weeks, Israel has lobbied the Trump administration to step up its sanctions pressure against Iran, and asked the International Atomic Energy Agency (IAEA) to cut ties with the country over its alleged nuclear weapons programme. Iran maintains that it has no intention of pursuing nuclear weapons, or weapons of mass destruction of any kind, and has repeatedly stated that Israel remains the only nuclear weapons state in the Middle East. Earlier this month, the IAEA reported that Iran had increased its uranium enrichment activities beyond the 3.67 percent purity levels outlined by the nuclear deal to 4.5 percent. This is still well below the estimated 80-90 percent enrichment levels required to build a nuclear bomb.