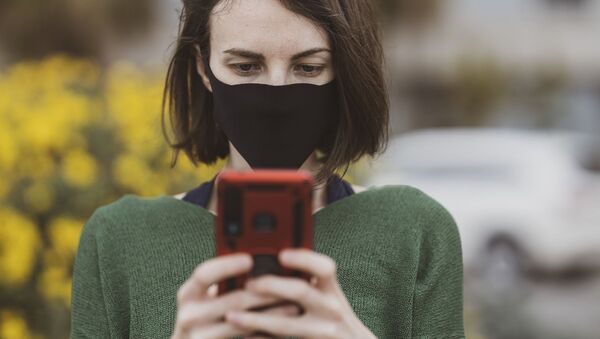 © Photo : Pixabay
Subscribe
International
India
Africa
A national face mask mandate within the US could substantially lessen the daily growth rate of new COVID-19 novel coronavirus cases within the country and raise the number of mask-wearing Americans by 15 percentage points, according to new research conducted by a team of Goldman Sachs economists.

“Our baseline estimate is that a national mandate could raise the percentage of people who wear masks by 15 [percentage points] and cut the daily growth rate of confirmed cases by 1.0 [percentage point] to 0.6%.”

Additionally, he said that a federal mandate requiring Americans to wear face masks could also be successful in rescuing the US economy from another round of lockdowns, which economists estimated would “subtract nearly 5% from GDP.”

The researchers arrived at these estimates by examining the population behavior of individual states. Hatzius and his team found that only 40% of Arizona respondents claim they “always” wear face masks in public, while 80% of those surveyed in Massachusetts said the same thing.

While non-medical-grade face masks have been proven to assist in lowering an infected individual’s likelihood of spreading the contagious disease, statewide death rates may have played a role in citizens’ likelihood to wear one.

Arizona has recently experienced a surge in COVID-19 cases: current US Centers for Disease Control and Prevention (CDC) estimates detail that at least 74,533 cases have been identified in the state, and 1,588 related deaths have been documented.

However, CDC data shows Massachusetts has identified at least 108,768 positive cases of the novel coronavirus, and 8,095 deaths have been confirmed in the state.

The use of face masks has become something of a political issue in the US, with US President Donald Trump refusing to wear one, despite frequently traveling across the country.

Dr. Jason Kindrachuk, an assistant professor of viral pathogenesis at the University of Manitoba and Canada Research Chair in molecular pathogenesis, told Radio Sputnik’s Loud and Clear on Monday that it does not appear as if the pandemic was viewed as a national issue in the US - at least when compared to its northern neighbor of Canada.

He also said that while there was some confusion regarding the usefulness of particular masks in the beginning of the pandemic, science has come a long way, and scientists have “learned a decade’s worth of information about the virus in six months.”

“A lot of what we’re seeing with the pushback on masks is partly due to the politicization of this pandemic. But we are also seeing a weird integration of different kinds of pseudoscience communities that are coming together,” he told hosts Brian Becker and John Kiriakou on Monday.

Hatzius and his fellow researchers also noted that state governments issuing mandates regarding face masks resulted in a 25-percentage-point raise in individuals who “always” or “frequently” wear masks in those places, according to data which analyzed 20 US states and the US capital of Washington, DC, between April 8 and June 24.

“If a face mask mandate meaningfully lowers coronavirus infections, it could be valuable not only from a public health perspective but also from an economic perspective because it could substitute for renewed lockdowns that would otherwise hit GDP,” Hatzius wrote, as reported by CNBC.