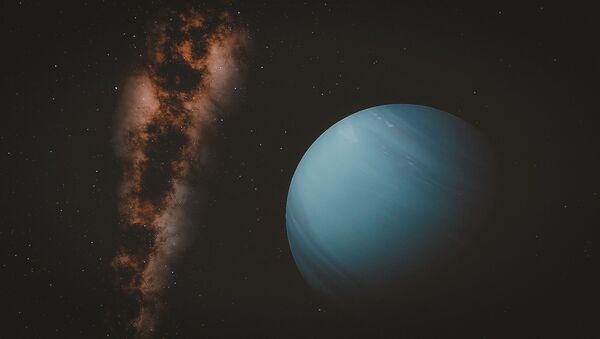 CC0 / /
Subscribe
Neptune and Uranus, the two most distant major planets in the Solar System, are also the most underexplored. Thirty years on, Voyager 2 remains the only space mission to have approached them, but a new experiment provides an important insight into their physics.

There is now new evidence proving the existence of “diamond rains” on Neptune and Uranus, according to a new study published in Nature Communications.

Scientists have suspected for decades that it’s literally raining gems in the methane oceans of the two far-flung planets.

Although Neptune and Uranus are called ice giants, “ice” here refers to a hot slushy fluid of materials, like water, ammonia and methane, over an Earth-sized rocky core and below lighter gases like hydrogen and helium.

The long-standing theory goes that carbon, the sole component of diamonds, which is mixed in with the gases on Neptune and Uranus, gets squeezed out of the atmosphere at super-hot temperatures and under immense pressure.

This process is believed to create cascading diamond showers just above the cores of the planets. The extreme reaction was first simulated in a German lab in 2017. Scientists rapidly heated polystyrene, a stand-in for methane, with high-powered optical lasers to replicate conditions some 8,000 kilometres below the surface of Neptune and Uranus. This is where they believe the temperature and pressure are just about right for diamonds to form.

In previous experiments, they used X-ray diffraction to study the reaction. The technique can reveal crystal samples but works worse with non-crystal structures where molecules and atoms are located more randomly.

Now, scientists have used X-rays to examine how the light was scattered by the electrons. This process allowed them to analyse the entire structure of the matter during the reaction.

“In the case of the ice giants we now know that the carbon almost exclusively forms diamonds when it separates and does not take on a fluid transitional form,” Dr. Dominik Kraus, study lead from the Helmholtz-Zentrum Dresden-Rossendorf research lab, explained in a press release.

The new experiment used the X-ray laser at Stanford’s National Accelerator Laboratory's Linac Coherent Light Source. “We produce about 1.5 million bars, that is equivalent to the pressure exerted by the weight of some 250 African elephants on the surface of a thumbnail,” Kraus said.

His team found that hydrocarbon splits into carbon and hydrogen under high pressure, and carbon atoms then transform directly into crystalline diamond.

The diamonds then slowly sink to the core of the planet because they are heavier than the surrounding matter. In the process, Kraus said, they rub against the matter and produce heat, which is an important factor for planet models.

“We now have a very promising new approach based on X-ray scattering. Our experiments are delivering important model parameters where, before, we only had massive uncertainty. This will become ever more relevant the more exoplanets we discover,” the scientist said.

The understanding of processes on ice giants is expected to boost the search for planets that can sustain life and help humans better understand the Solar System.

Planets of the size of Neptune and Uranus are extremely common in our galaxy: their number is estimated to be around nine times greater than the number of bigger planets similar in size to the gas giants Jupiter and Saturn.

“Our experiments are delivering important model parameters where, before, we only had massive uncertainty,” Kraus said. “This will become ever more relevant the more exoplanets we discover.”

000000
Popular comments
Two more planets to be targeted by democracy?